HerRoom.Com Makes Me Want To Punch A Seagull

Note: Readers, I've just found an email I received from Herroom asking me to remove the copyrighted images from this post, as I did not receive permission to use them. I regret not checking my blog email account more often, as I would have found their message sooner. I had intended to show the images for what they are, as they are useful and well done in certain ways (albeit offensive in others), while taking issue with Herroom's phrasing. Legally, I do have the right to use their images without permission in a post that is critical of them. It is not as though I did not mention the source of the images. But it was my mistake to not realize they would react strongly and go on the offensive. The images are removed for now. I'm going to replace them with images of my own that explain what I'm trying to get across. For now, there will just be spaces there--hopefully I'll be able to replace the images with my own images soon.

*Note about the title. I asked my sister if it was a weird title and she said yes. My boyfriend gets really annoyed about noise pollution when he's studying and once said "If I hear another saxophone I am going to punch a seagull." I thought it was hilarious so I'm using it now in my moment of rage. I actually think seagulls are awesome and will not be punching any. I might punch my computer screen, though. Read on to see why:

On a reader's suggestion, I just went to Herroom.com to try out their new "Know Your Breasts" feature. You can check it out here if you're feeling like you've got a thick skin today and can handle some bizarre textual insults about features you never knew you needed to be insecure about.

On the surface, this is an awesome idea--a website that sells bras teaches you how to identify your shape and what works for that shape, and then directs you to those bras. Of course, they are just doing it to try to raise sales for themselves--they obviously don't link you to the cheapest source for a bra, or to better bras that they don't carry, but still. I was actually kind of miffed at first because it would have sort of negated the whole purpose of my blog if it had worked, ha ha. This freaking thing was apparently even featured in the New York Times. Well, BEWARE, girls! We still need blogs because bra sellers and manufacturers STILL don't understand how boobs work! Rage courses through my veins!

To start with I'm going to just go through the problems with the results I got for my shape. I will go into further detail about the results for different shapes later... hopefully with help from you guys, if you do try it out.

The first thing I should mention is that at first I was super impressed by the quiz! They asked a lot of pertinent questions in the first part of the quiz and the illustrations are AWESOME. They show the differences between full-on-top and full-on-bottom better than I could, plus hopefully it will bring those concepts to a wider audience (and help people to realize that full-on-top is NOT a synonym for perky). Of course, the images were all extremely nipply, so here's my slightly less NSFW censorship to show how well they did with these images:

The boobs on the top left are the shape I consider "full on top". These images are a pretty similar, but more detailed, less teal version of the images I drew in my post on how to figure out the shape of your boobs: 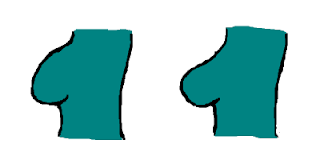 There's a reason I made my image teal, too, by the way... Humans don't have just one skin color, and since none of us have teal skin, I figured it would apply to all of us equally. HerRoom didn't do the same... why are all their boobs white? ALL of them?

My next prickling of discomfort came when, instead of calling full-on-top boobs "full-on-top", they chose to go with "oversized upper breasts."

As you might know from my blog, I really hate terms like "oversized," "huge", "abnormal", etc. Seriously, HerRoom, why not just say "FULL upper breasts?" After all, that's what you MEANT--and that doesn't carry a connotation that there is an ideal "normal-sized upper breast" and I fall outside of that golden category. This sort of linguistic subtlety is pretty basic, folks, especially when you're writing about boobs and trying to convince women to pay your high prices.

After establishing your shape, the quiz then goes through some more questions with varying degrees of interest and relevance. Some of the questions regard things I never thought about before, like protruding versus inverted collarbones, and loose skin near the armpit which apparently is common in older women. Some of the other stuff just seemed kind of awkward and unecessary. Do not even ask me why they need to know whether or not you have "large areolas." That affects the fit of a bra how??? It sort of seemed like it was just another opportunity for Herroom to draw attention to "normal" versus "abnormal" features. Please correct me if I'm wrong, but I can't see how an areola of any size or shape would have any effect on bra fit. It's just skin that's a different color, really not a big deal at all.

They make you enter an email address to get your results. I fortunately have an email account that I use just for spammy things like this, so I used that--I'd advise doing the same unless you want Herroom to be your newest pen pal. I was still pretty hopeful about my results at this point--not hopeful because I need help, since I know what works for me, but hopeful that the quiz would be awesome and I could recommend it to people.

The bra styles they suggested for my full-on-top boobs (which are NOT oversized, thank you very much) were the total OPPOSITE of what works for me. They are, for the most part the bras I would suggest for someone who has lower fullness. Not one of the shapes they suggested would work for me. Let's examine.

So first, they give your "very personal results", which are actually just a summary of all the things YOU selected in the quiz... things you already knew. (This also includes a flash of the other thing I LOATHE about HerRoom, their pathetic "Universal Cup Sizing" initiative. Post on that coming later on.)

First off, seamless bras. Okay, seamless bras could, in theory, work for full-on-top boobs, but in my general experience, they don't. That's because they are generally made with a lot of space in the apex that is either evenly distributed between the bottom and top of the cup (leaving full-on-top girls looking pointy because they can only fill out the top, and vice versa) or mostly at the bottom, meaning epic quad-boob. Not their worst suggestion (just wait) but a slightly odd one.


Multi-what under-who? I assume by this they just mean "seamed bras." Okay... seamed bras can work for every shape, but it is the seam PATTERN that makes or breaks the fit on a particular shape. In the upper sizes, seamed bras are just about all there is, so this suggestion doesn't exactly narrow it down for someone who might be looking for guidance.

Say what? Bandeau bras? HerRoom declares that strapless bras will be difficult for me because of my "bountiful upper breast". Okay, "bountiful" is better than "oversized," but a kinda pervy word. It's true, by the way, that strapless bras are tricky. They're tricky for ALL shapes, just for different reasons. Strapless bras are tricky for full-on-top boobs because there is so much weight pushing down from the top, it tends to push the bra into a torpedo/football shape. Strapless bras are difficult for boobs with lower fullness because it is hard to lift the weight at the bottom. I guess I just don't think that a bandeau bra would be any better, or even any different, really. I will also bet you a million dollars that HerRoom doesn't sell any bandeau bras in my size.

Okay, that one is basically the same as the first suggestion. I'm baffled by their description, though. These bras "will provide modesty and help mask your lower apex"? Um, NO. You don't "mask" a lower apex--that would mean squashing your boobs down and pretending the apex is somewhere else, which is really bad for your breast tissue and will increase sagging over the years. Instead, you should seek a bra that is lower-cut and hence has an apex that more closely matches your own. (By 'apex', HerRoom and I both essentially mean "where the nipples hit", by the way.) Bras that have less volume in the cup can also help for some people, but that's not true for everyone.

This gave me a bit of a laugh. Nipple concealers? This was after I had selected "No" to the question about whether I struggled with nipple show-through. So.. not really in need of this "smooth look", but thanks anyway.

And finally, THE ULTIMATE WORST ADVICE I'VE EVER HEARD:

Because HerRoom failed so spectacularly at giving any reasonable advice, I'm going to give my own. I've given these same tips before, but not all in the same place, so here they are. 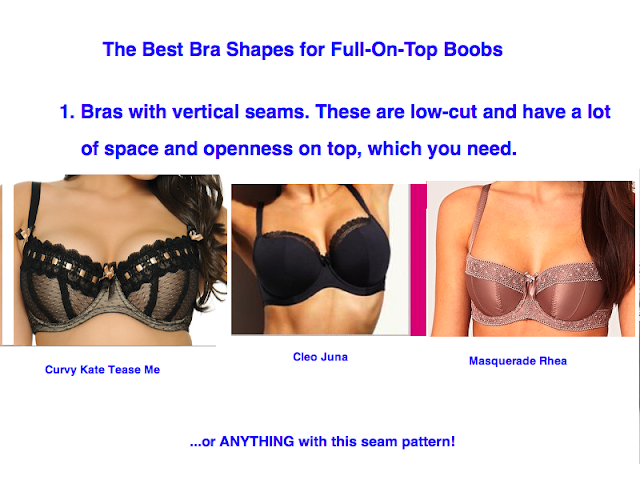 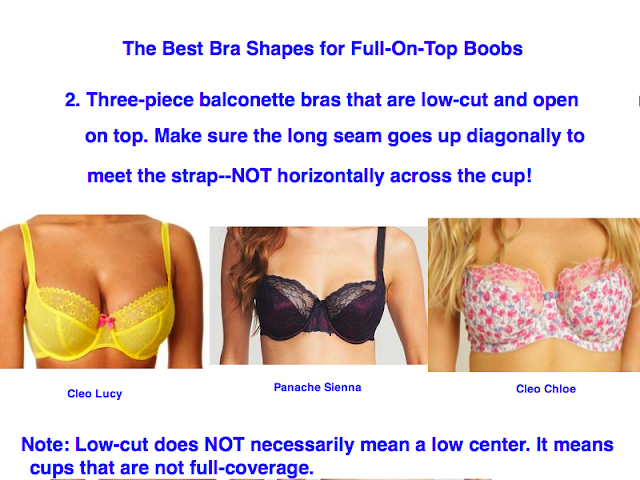 One thing I'm glad HerRoom brought up, though, is the question of distance between boobs. I do best with the bra styles I've pictured above, but I don't have a lot of space between my boobs, and several of those bras have very wide gores. That's why I alter my center gores. Distance between boobs is definitely a topic deserving its own post later!