After all the hoopla surrounding the release of the first J-cup (in two band sizes) molded bra, I knew I had to try it so I could review it for this blog. I don’t really wear padded or molded bras much, so it wasn’t a must-have for me, but the review does seem necessary.

I ordered the Smoothie from Brastop in size 28J. I would have preferred a 30HH rather than a 28J, as I don’t like super-tight bands, but Brastop was already sold out of that size. They have it on US Figleaves now at just $44, so I would recommend buying it from there if you're in the US to save a few bucks on shipping. Last I checked, they still have all the sizes in stock there. As to the cup size, I wanted to try either the 30HH, 28J, or 32H—those sister sizes are the same as the cup size that fits me in Curvy Kate’s unpadded balconette bras. By trying the same size that fits me in other Curvy Kate bras, I can accurately compare the differences in fit.

My first impression of the Smoothie is that it’s very different from the Freya Deco! The molding is thinner and a bit stiffer than the molding in the Deco. It is therefore less bulky, but also less soft. The center gore is also higher—the Smoothie has occasionally been listed as a plunge bra, but I wouldn’t really consider it a plunge. The center gore is neither very high nor very low. 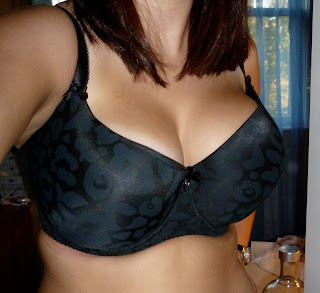 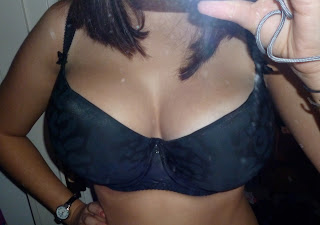 The 28J was a perfect fit on me in the cups. The cup shape is very nice—round, but more natural than the almost-square look a lot of us get in super-round bras like the Masquerade Rhea, Cleo Juna, and Curvy Kate Tease Me/Thrill Me. I think this is a perfect shape to suit all preferences. 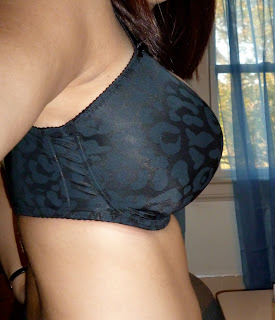 The cup shape is also very even. It fit my full-on-top boobs without cutting in, but it isn’t so open as to gape on boobs with less upper fullness, as the Freya Deco often does. I did have a little empty space in the bottom of the cup, as you can see here: 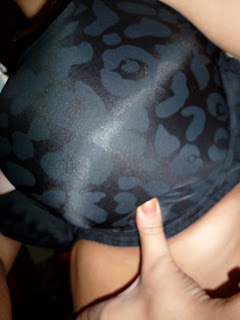 Likewise, those with full-on-the-bottom boobs might find they have a little extra space at the top of the cup. This is the classic issue with molded bras—they don’t have as much ability to take on the shape of the breast as non-padded bras. But I think the Smoothie has basically surmounted this issue by providing a shape that is in the middle and thus appropriate for most different shapes. Of course, this is just my guess; we will be able to see if it’s true as more and more people of different shapes try the Smoothie, but here’s Cheryl’s review at Invest in Your Chest. She has a very different shape from me and the Smoothie looks great on her. Brood at Brood’s Big Bras reviewed the Smoothie too and said that it seemed to be running big on everyone--apparently that is a consistent issue with the Australian shipments of the Smoothie, so if you're buying from an Australian retailer, you'll want to take that into account. For others, although lot of people are used to sizing up to  fit the Thrill Me and Tease Me, the Smoothie definitely is more forgiving in its shape, and has more space, than those bras. I would recommend going with your Curvy Kate unpadded size rather than your Showgirl size when trying the Smoothie.

The band felt like an average 28 band—not as loose as the Showgirl bras, nor as tight as the Angel, but about the same as the other Curvy Kate unpadded balconettes.

The print on the Smoothie is very subtle. It shows up a lot in flash photos, but when you are just looking at the bra in normal light, it’s less noticeable. That could be good or bad depending on what you’re looking for.

Although I don’t like molded bras myself, I’m really impressed by the Smoothie. It’s a big step forward for the full-bust market and I really hope that Curvy Kate brings it out in a wider range of cup sizes in the larger band sizes so it can serve the market more fully. I would whole-heartedly recommend the Smoothie for people who seek molded bras.
Posted by Bras I Hate at 11:28