In a past post, I revealed how bra manufacturers have literally scarred me for life. But there’s also the mental scarring that comes from seeing an unflattering photo of yourself online. Here’s one that cropped up recently: 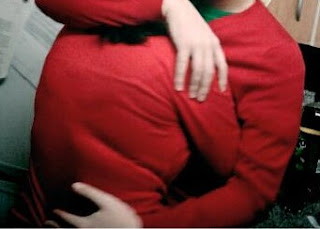 See the way the elastic at the bottom of my bra band is cutting into my flesh and leaving a deep impression that is visible even through a shirt AND a cardigan. This isn’t happening because the bra is the wrong size, or because of whatever “back fat” I may have—I know because I have a few bras that don’t leave a thin mark like this. Plus, it is only the strip of elastic at the bottom that is cutting in, not the whole band--I'm not bothered by the teeny-tiny bulges at the top.
I personally find I can mostly avoid this look if I stick to bras that have three hooks rather than two. But some of my best-fitting bras (Cleo’s Brooke and Lucy bras) only have two hooks.
I also find that the cutting in gets much worse when the band is too big, because it rides up and sort of sits just above where the back fat is: 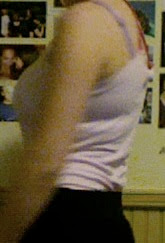 But I think it would prove possible to greatly reduce this cutting in by improving the construction of the band—rather than using a weak mesh for the band and tightening that up with a thin strip of much tougher elastic at the bottom, why not make the whole band out of the tougher material? This would reduce the appearance of a thin line cutting in, in the same way that a flat lace band like this: 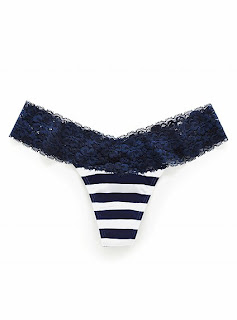 …cuts into anyone’s hips less than a string on a bikini or thong, regardless of size. 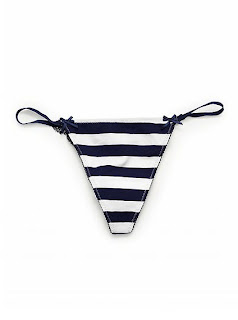 Making underwear lie smooth under clothes doesn’t have much to do with women’s bodies or size; it has everything to do with fabric and construction. Although I recognize that a bra band has to do a lot of work and is probably always going to cut in a little, I still think a wider section of elastic could reduce a lot of the visual effects of that. If the problem was removed, I suspect fewer women would be scared off from wearing their right size by the threat of visible bra lines.
Posted by Bras I Hate at 05:29