When I tried Curvy Kate's Portia bra last time, I was dissatisfied with the shape it gave and how much of my chest it covered. But since I had tried it in a 28JJ and 28K, I decided to have a go at a few smaller sizes. I ordered a 28J, my regular Curvy Kate size, and also a 28HH since the Portia is more stretchy than the Angel or Princess bras.
The difference between the two sizes was startling and hilarious. One friend who saw the difference suggested that this image should be put up on the wall of lingerie fitting rooms everywhere! What a difference a cup size makes!
The 28HH was much too small, but the 28J was a good fit on me, so I guess Curvy Kate is right when they suggest that most people can wear the same size across the board in all their styles—the more I try their bras, the more I realize it’s mostly true. (I still ought to size up in the Angel, but I don’t HAVE to, and the Princess runs a little smaller too.)
The Portia has more of a V-neck appearance from the front, especially compared to the Cleo Lucy that I got around the same time. So the center gores are about the same, but the Portia has more fabric coming up across the boobs. This bothers me less and less as I get more used to my boobs, but as little as a few months ago, this extra fabric would have been the bane of my existence, so if you dislike “a lot of bra”, Panache is still a better bet than Curvy Kate:
I also found the shape couldn’t beat my Cleo bras.
The Portia gives a fairly rounded shape, but doesn't lift as much as the Lucy, and more of the weight is remaining at the bottom of the bra--you can see how the Portia's cup hangs over the underwire the tiniest bit. But it isn't an awful or embarrassing shape, quite decent really, and the bra itself is beautiful, a lot more attractive than my white Cleo Lucy, and much prettier than the Portia in black. 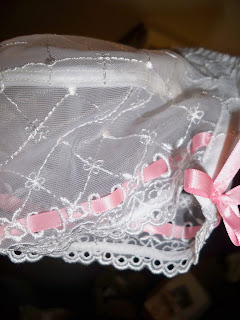 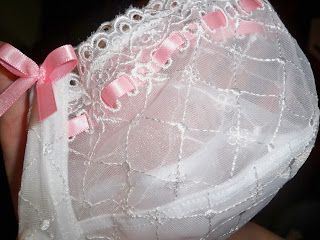 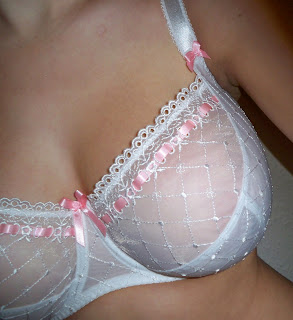 I think the third photo is the best evidence of both my likes and dislikes regarding this bra. You can really see the pretty colors and delicate embroidery, and the thin but well-made straps. But you can also see how large the upper section looks, and how the bra isn't lifting as much as I'd like. I wasn’t exactly blown away by this bra, but now that I’ve found my correct size, I want to withdraw the negative review I gave the Portia before. Now I’d say, if you like Curvy Kate bras or want to give them a try, this is one of the prettier ones. It's worth a shot if you like the look of it.
Posted by Bras I Hate at 04:21