The Cleo Sadie Longline has recently become available on Brastop.com and Amazon.co.uk at discounted prices so I thought I’d give it a whirl. I like the idea of a longline bra because it has more hooks, which helps prevent awkward lines under clothing. It also provides more overall support because there is more substance to the band, which is good for avoiding back pain.
Although the Sadie Longline actually comes in a 28 band, it only goes up to an H cup, so since I normally wear a 28HH or 28J, I decided to try a 30H (equivalent of 28HH). I figured even if it didn’t fit it could be useful for a review. 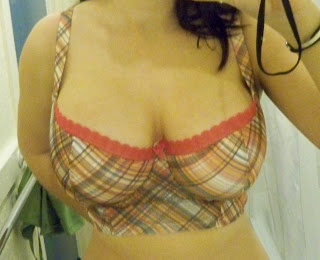 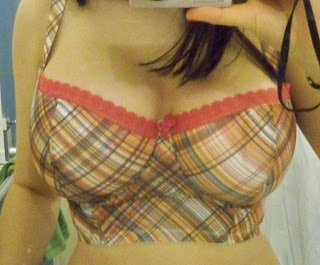 The 30 band actually was a pretty good fit on me! But that’s NOT because the band runs small—it’s because of my ribs. My ribs are stubborn buggers and they stick out right underneath where a regular bra band hits. Therefore, since the longline goes down far enough to have to wrap around that part of me, a 30 band was actually an appropriate fit for me in this style. It looks a little loose in the photo, but that is only due to the top layer wrinkling very slightly over the inner layer of fabric.
I’m not saying I wouldn’t have preferred a 28 band if the cups went high enough, but this worked pretty well. If your ribs bulge out right under your bra band and you’d need to size up in the band to get the right cup size, you might end up with a workable fit despite sizing up.
The cups were a good fit on me too—I usually find with low-cut half-cups that are fairly open at the top, I can wear a 28HH instead of my “normal” 28J. The 30H (as the equivalent of the 28HH) fell into this category. I think most people, though, would do best sticking with their normal cup size. 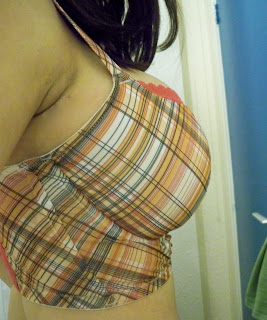 The padded cups are made with vertical seams, a construction I like because it gives great uplift and shape. Normally I’ve seen these cups made with three sections, but the Sadie (like Cleo’s Juna and Poppy bras) has just two. I think it works well and is a little less minimizing in front than the three-section cups I’ve tried.
Overall I was actually pretty impressed by this bra. It was a fairly easy, non-fussy fit which gave nice shape and support. The back band hardly cut in at all and streamlined my silhouette (my darn ribs often look a bit bulgy/lumpy in normal bras). I think the back would still be visible under a thin shirt, especially where it cuts in at the narrow point of my waist, but it would not show under a sweater, as too-thin bands can. I also love that it’s plaid and that the plaid is continued all over the cups, front of the straps, and band. 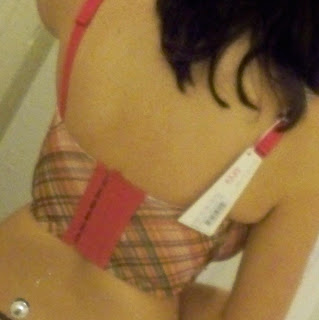 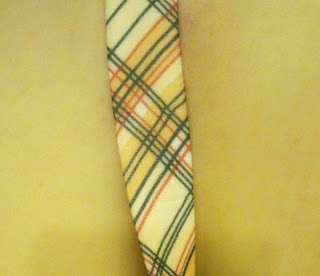 The only thing I hate about this bra is that it’s orange. I know loads of people who love and covet orange clothing, and particularly orange lingerie, but it’s just not my personal favorite. I don’t know how long the longline trend will last, but here’s hoping that Cleo will someday make this one in a different color—and hopefully a few more cup sizes!

In unrelated news, check out my "Fairy Bra Mother" letter at Hourglassy!
Posted by Bras I Hate at 16:50