I’ve known about BiuBiu ever since Thin and Curvy wrote her original post about their clothing, and I’ve also seen glowing reviews from FullerFigureFullerBust and Sophia Jenner. I’ve often looked at BiuBiu's website and lusted over the adorable styles, especially their tops.
But I never tried BiuBiu before because, strange as it may sound, I actually don’t struggle that much to find clothes I can wear in normal stores. I think that’s mostly due to the fact that I don’t mind showing off my lumps and bumps in stretchy knit clothes—it’s woven styles, and fancier or more professional looks, that are often harder to find for curvy bodies on the high street. I’ll do more posts in the future, though, on my tricks for finagling a fit in mainstream stores.
I decided to try BiuBiu, though, when I saw their Etna top. It’s an empire-waist babydoll top, which means it is one of the several styles that I would never be able to find in normal stores: the “designated boob room” top. I loved the Etna, so I followed the size chart on their website and ordered it in a 36 BB/BBB. Behold:
I love the ¾ length sleeves—I consider it one of the most flattering sleeve lengths, because it draws the eye to the waist. I also really like the colors and the neckline is a perfect depth—as low-cut as it could be without becoming too cleavage-y.
One thing to know, though, is that you probably will need to wear a waist belt with the Etna top. A few people I know who have tried it said that without a belt, it bagged over their stomach, giving them a pregnant look. I actually found that mine mostly bagged in the back, but either way a belt really helps make the look more flattering. Although it looks fine from the front for a more relaxed, casual style, I think the belt makes a big difference to the side view. 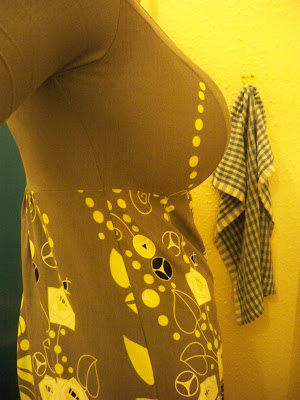 I actually hardly ever wear waist belts—because I have SUCH a short torso, they often end up showing off the wideness of my hips, rather than the narrowness of my waist (plus my waist doesn’t look that narrow from the front anyway). But, because of the more relaxed cut of the bottom part of the Etna, I found the waist belt was very flattering. Unfortunately, I’ve found I need to pull the top down a lot because the empire seam keeps moving up to show above the belt, a look that isn’t ideal. I’m going to need to find a way to secure the belt to the top; perhaps a snap affixing it to the back of the top. However, I should clarify that this isn’t a fault with the top; it’s because the boob section is a TINY bit too small for me. I knew when I ordered that I was a little bit outside the listed measurements for 36BBB, but it’s still a good fit; it’s just that the top doesn’t QUITE have enough space to traverse my boobs and reach where the belt should be. I’m hopefully that adding the snap will fix this minor issue. Even if it doesn’t,  I like the top enough that I don’t mind pulling it down every hour.
I’m not used to wearing clothes that are cut for my bust (like BiuBiu or Pepperberry) so when I do, I’m often startled at how they show off my boobs. That is, they make my boobs look the size they are: big. It’s a bit of an adjustment but hey, I can’t ALWAYS hide my shape in high street clothes. I did find that when I first tried the Etna, my boobs visibly hung over the waist belt. You can see that more in this photo. 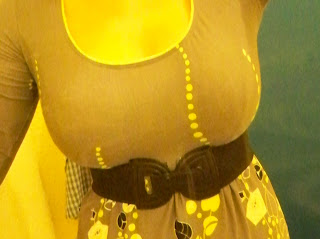 The effect was lessened by changing into my 28HH Cleo Lucy, which gives me more lift than any of my other unpadded bras. It also worked well with a Curvy Kate Tease Me, but unfortunately the ribbons showed through the top, as seen below, so that may not be a feasible option. (I continue to long for a nude lace Tease Me. Ultimate Dream.) 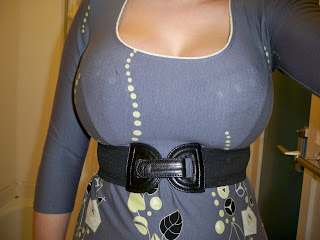 In my opinion, it looks longer on the model on the website than it is in real life—I was expecting it to be nearing dress-length on my short torso. But I actually prefer this length, because it’s long enough to wear with leggings, but short enough to wear with a short skirt in the summer.
My only other annoyance with this top is that I wish they hadn’t continued the yellow spots on the upper section. On my right side, the shape they form makes it look a bit like pincers are groping my boob from below. From what I can tell though, the shape the pattern takes on the upper part of the top is more or less random, so not everyone will have this issue.
For me, the greatest measure of whether I like an item is whether I am willing to overlook its small flaws. As you might have noticed from my blog, I am pretty picky and small details can really ruin my opinion of a garment! But with my Etna top, I find I am really happy with it, even though there are a few details that could be better. BiuBiu really impresses me as a company, I would recommend their clothes to a friend, and I will most likely order from them many more times in the future.
Posted by Bras I Hate at 17:18