Due to my love of Cleo bras, I was always curious to try the Bonnie because I suspected from the seam pattern that it would be a great fit on me and give a great shape, similar to my beloved Cleo Lucy and Brooke and Panache Sienna. I hesitated to order it, though, because I have to be frank and say that I just hate this colorway: 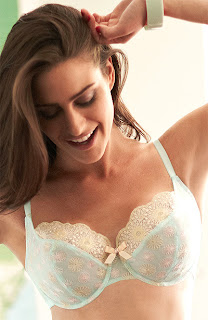 I can totally understand why people would like it, but personally I really dislike pastels, especially when it’s three pastels combined together (blue, pink, and yellow), so the whole look makes me grimace. It sort of reminds me of an Easter basket explosion (so I guess it’s appropriate to write this review coming off the Easter holiday weekend!).
I should note that the Cleo Bonnie also comes in this colorway that appeals to me much more: 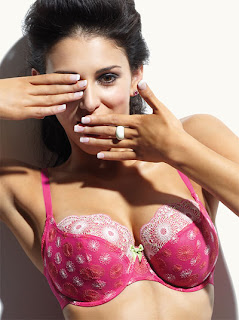 But, the pale blue and yellow was the one that happened to pop up on eBay at a low price at the very moment my curiosity got the better of me, so that’s the one I ended up with.
In person, the bra is actually a lot more beautiful than I expected from online photos. There is a lot of nice detailing in the stitching and the colors do give it a light, airy look—basically, it was more subtle than I imagined. 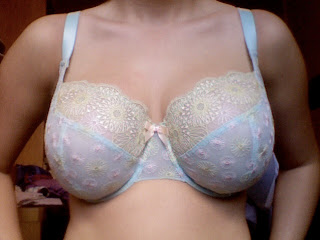 But, though I was happier than I expected with the colors, I was less happy than I expected with the shape. The Bonnie is higher cut than the Cleo’s Brooke/Frances/Lucy bras, and covers more of my chest. It’s also not as open at the top as the Frances or Brooke—there isn’t as much space there, similar to the top section of the Lucy. However, the top section of the Lucy curves back in with a very round emphasis as it has a bit of stretch—it’s only the very top edge that is tight. On the Bonnie, the upper section has no stretch at all due to the yellow sunburst stitching, so it sits much more flat. When I look down at myself, it creates a sort of flat plane across the area where my cleavage would be, which is something that often happens to me in Freya bras. It doesn’t make much difference to the shape from any vantage point other than my own (looking down at myself), but it is something that annoys me a little. I did find that taking in the center gore helped with that flat look and it also helped pull the underwires out of my armpits a bit, as they are very wide. Here’s the look with the center gore taken in: 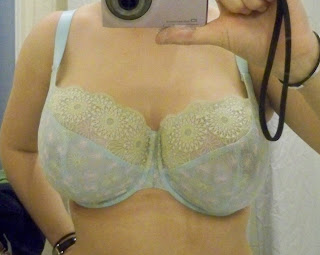 You may notice that between this photo and the last, the bow has gone missing. It had gotten a little askew and I tugged on it too enthusiastically to straighten it, and not only did it fall off but it actually separated into two pieces, as it’s not a “true bow” but two pieces stitched together. I haven’t managed to sew the bow back on yet, but I will definitely do so eventually because I think the bra looks kind of stupid without it.
Now, on to the sizing. The back is looser than other 28 bands in Cleo, so it may not be the best bet for small 28s. It's fine for me though, because I'm more on the edge between 28 and 30 (and actually I've started comfortably wearing 30 bands in certain bras).
As for the sizing of the cups, I can normally wear either a 28HH or a 28J in Cleo, and I chose to order a 28J in the Bonnie. The fit is good, but the wires are a bit too wide for me, and as you can see from this side photo, I don’t get the best lift: I think this is definitely a fault of my choice to buy the bigger of the two sizes I normally wear rather than the fault of the bra itself. I say that because the shape looks almost exactly like the side view of my 28J Lucy… 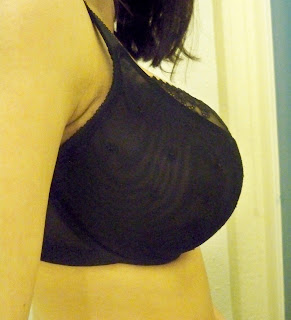 …which doesn’t give nearly as much lift compared to my 28HH Lucy: 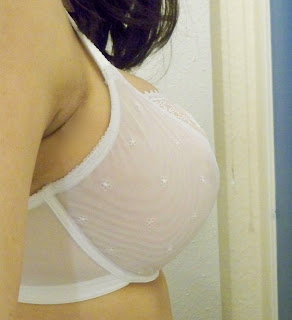 Because of the similarity to the bigger Lucy, I’m convinced that I should have gotten the 28HH in this bra, and that if I had, I would have gotten a lot more lift. However, if I’d done so, I would need to take in the center gore (to turn the cups and make them more open on top) a lot more to deal with the tight, non-stretchy upper section. 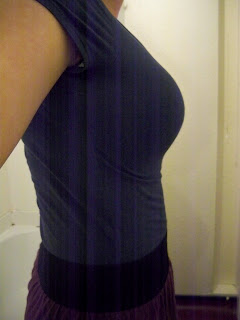 You can also see in the above photo how the tight top section is pressing down on my shape a bit even in the bigger size, and how I'm getting a shade of quadraboob--not enough to ruin the look in my opinion but it is there.
It might sound like I had pretty mixed feelings about this bra, but ultimately, I feel positive toward it. It’s a good bra. It’s not the BEST Cleo bra for my full-on-top shape, but it’s workable, and I think it might actually be a good compromise—those whose boobs are fuller on the bottom might like this bra more than the Brooke/Frances because there would be less risk of gapping as the upper section is tighter. It’s probably not going to be the best bra ever for those with more extreme shapes (really full on top or really full on the bottom) but I think it can still work for them, and I think it will work quite nicely for those with a shape somewhere in the middle. I still think the pink colorway is a lot prettier, though. Next time I'll get the pink Bonnie, and in the smaller of my two sizes!
Posted by Bras I Hate at 15:50