Curvy Kate's Sizing... Letting Us Down? 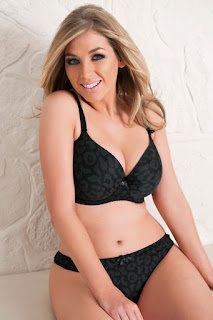 Today I saw an interesting graphic revealing the sizing for some of Curvy Kate’s upcoming, and long-awaited bras (you can see photos of their Autumn/Winter 2012 collection, and sizing information, here). Especially with the new “Smoothie” bra having been trumpeted as the first ever J-cup molded bra, I think a lot of people will be quite startled and disappointed to see that it doesn’t go up to a J-cup in anything other than 28 and 30 bands.

On the one hand, this is a rare reversal of what the sizing looks like for many bras. Most companies seem content to either end the sizing at the same cup size over every band size...

....or to go up to higher cup sizes in only the higher band sizes, which doesn’t really make sense. For instance, Bravissimo's bras go up to a J in 28 band, but up to K-L in bigger band sizes.

This seems odd as a 30J would have the same or similar cup volume to a 28JJ; it’s obviously a decision they make based on demand rather than ‘fairness’, but it has always annoyed me.
So Curvy Kate’s sizing for these bras does technically make a little more sense—they end the cup sizes at a proportionally equal volume for every band size (except the 28, which would need to go up to a JJ for all to be equal). This does at least convince me that Curvy Kate knows how proper bra sizing works, with cup sizes changing proportional to band size, something I’ve never been convinced that Freya is fully sentient of.
However, Curvy Kate’s decision also goes against what I think of as their whole philosophy of inclusive sizing, and especially the way in which they bring certain types of bras to sizes that have never had them before. I thought that’s what they were trying to do with the creation of a molded bra up to a J-cup. But for those wearing a 38 back, this bra only goes up to a G, which is hardly revolutionary; I know plenty of people who need sizes bigger than that. I’d also prefer if this bra went up to a K cup in a 28 band--that way even if they do cut off the sizes proportional to band size, at least they'd make it up to a GG or H in the 38 band. Curvy Kate’s Showgirl and padded bras have always come in fewer sizes than their unpadded bras, which seems like a real shame as it is often those with the biggest boobs who most desire the shape and support of padded bras, and who have the fewest options elsewhere. I know what I should say—that “it’s a start”—but I wish they would have started this with a bigger bang. I’m sure Curvy Kate wants to make sure to get the shape and support exactly right before they put bigger sizes into production; maybe I'm wrong about this, but I’m convinced that most people who are sized out of the Smoothie would have been happier with a slightly imperfect version rather than none at all.
Posted by Bras I Hate at 05:34