I recently ordered the Flirtelle Sublime because I’d never tried any of Flirtelle’s stuff, even though their bras are usually very inexpensive on Brastop. As Curvy Kate’s “sister brand,” the structure and sizing is like that of Curvy Kate, so I ordered my normal Curvy Kate size of 28J. 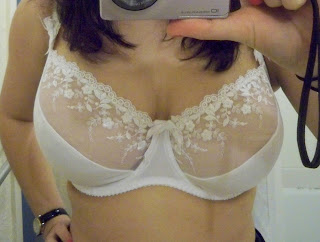 You can see the bra looks nice from the front. I was happy to see that the sheer upper section didn’t appear too vast and didn’t make it look like “a lot of bra.” The overall look is actually quite delicate.
Sadly, the bra itself is far from delicate. The bottom sections are made from a VERY thick material. Since it is marketed as satin, I expected a thinner, smooth, shiny fabric. In reality, the fabric of the Sublime felt to me like sailcloth, or something you could make shoes out of. In addition to being very thick, it was also somewhat course to the touch, without the buttery-smooth texture that usually goes along with satin. I am easily turned off by textures I dislike so this bra was no-go for me from the second I touched it.
My only other issue with this bra was the fact that I got a very slight bit of wrinkling along the seams, which you can see in the photo below, meaning it was the slightest bit too big. I think, though, that a cup size down might have been too small, and the wrinkles did not show under a shirt. 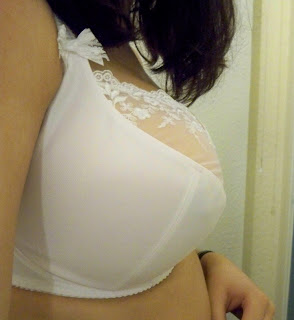 Overall this bra is not terrible, but the thick fabric caused me to hate it. For those who don’t mind a thicker fabric, this may be a nice bra to try—I imagine it could even be used as a sports bra because of its ultra-supportive material.
I have a theory that the Curvy Kate “Lottie” shares this very thick fabric, as it is listed in their catalogue as having a “Strengthening laminated lower cup," and in pictures it looks like a similar fabric to the Flirtelle Sublime, though the shape is different. 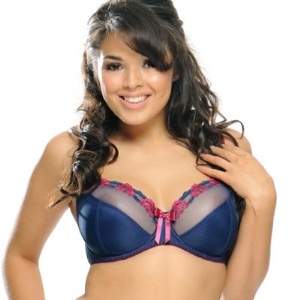 The same phrase “Strengthening laminated lower cup” is used to describe their upcoming “Gia” bra, which is a shame as I really love this cherry/blush color. 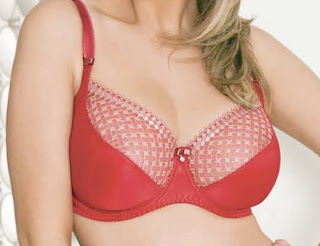 Of course, not every bra will suit every person, but I wanted to blog about the Sublime (and the Lottie and Gia) because I think people should know what they are ordering and in my opinion the Brastop website is not very clear in their description of the Sublime. I also think, though, Flirtelle has more to offer that I would like better—the Vineyard, Divine, and Dahlia bras all look worthy of a try-on. 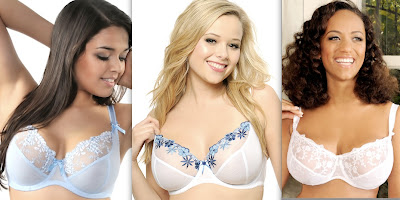