I went back to Bravissimo today to try out their new stock. I’m sorry to say the experience was kind of depressing in terms of the service I received. I’m not usually one to get on my high horse about this, but I was bewildered and embarrassed by my talk with the women who helped me; if I had even a fraction less confidence about my boobs, I might have just walked out.
In my experience, when you go into the fitting area in Bravissimo, the women working there always sort of stare at you like they are waiting for you to say something highly specific. In all my visits, I’ve never figured out what they want me to say, because everything that comes out of my mouth seems to totally baffle them.
Here’s how it would work in my mind: I go up to the desk, they say, “Hi! Would you like to get fitted?” I say, “Well, I normally wear 28J, but I can fit into a 28HH in certain styles.” They put me in a basic bra to check that I am still wearing the right size, then they bring me all the styles they have in my size and I try them on and buy what I like.
Here’s how it worked today: I said, “Um, hi, I wear a 28J but—”
The woman interrupted me and said, “What would you like to try on?”
I said “I’d just like to try things out and see what you have.”
She responded, “Well, everything in a 28 band sells out almost immediately so we don’t really have very much. We definitely won’t have much in colors.”
I said “Can I just try on everything you have in a 28J and also the things that stop at HH, in a 28HH?”
She said “Oh, no, I can’t bring you everything. Here, look through this catalogue and pick out the styles you would like to try on.”
Really? First of all, if everything sells out right away in a 28 band, why don’t they stock more? Second of all, that wasn’t even true—there was only one style that was actually sold out. Third, if there really was so little, why couldn’t she bring me everything they had? Fourth, do they really expect most people to walk in knowing one or two specific bras that they want to try? How are you supposed to know what will fit if you can’t try on a variety of styles?
Eventually my look of embarrassment became too much for her, and she caved and brought me the basic concept of what I asked for. Here are the results.
Bravissimo Ditsy Blossom 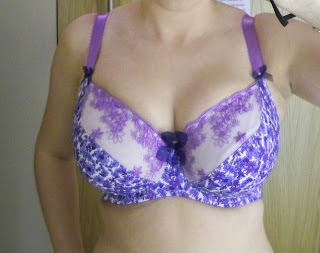 This one was actually prettier than I expected; from the online photos I thought it would be hideous, but the pattern and color were quite nice. The shape was similar to the Alana, so I knew it wouldn’t fit me even in a 28J. They only had a 28HH, so this is me breathing out all the way to make it look like it wasn’t horribly too small. 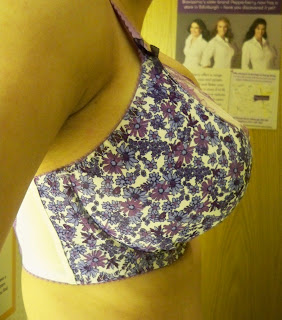 For Alana fans, this bra will probably be a nice fit. The band is quite tight, so it would last longer too. The fabric of the cups is pretty stiff and scratchy, though.
Bravissimo Rococo Charm 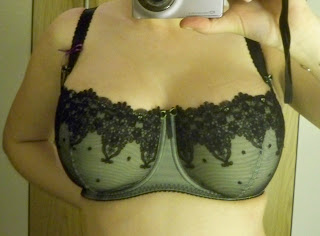 This is another half-cup along the lines of the Demi Diva/Parisian Plume. The fabric in this one was a lot stiffer, though, and I’m still not a fan of how high the center gore is. Once again, I recommend this bra for people who want to get a very minimized, round, compact shape from the side--compare it to the side views of Bravissimo's other bras. 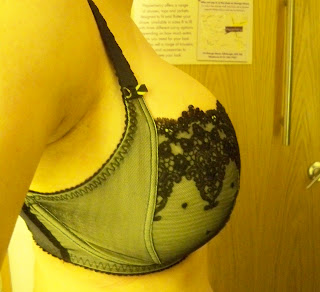 Panache Melody
Since I own this in a 28HH and it’s a bit small on me, I simply wanted to try it in a J-cup. It was indeed a much better fit, although it became even more V-necked and Freya-ish in its appearance from the front. 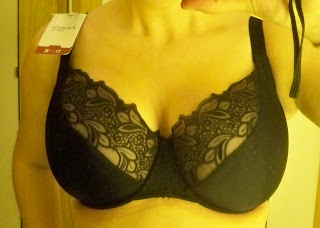 I don’t like how big the upper leafy section is—it makes the bra a lot less open at the top so it isn’t as good a fit on me as Panache’s Harmony bra (the supposed model for the Melody). 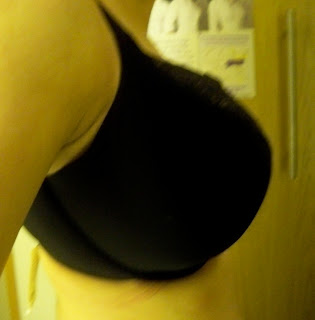 Also, the width of those wires is just getting crazy.
Bravissimo Broderie
This is one of those bras that has that pesky extra lining in HH-K cups, so it looks like a totally different bra from the product photo. 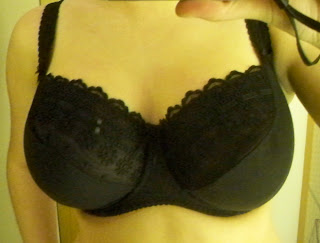 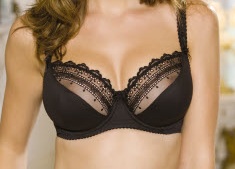 That said, I don’t dislike the way it looks with the extra lining, and I think it looks nice from the front. I’m not crazy about the shape from the side, though. 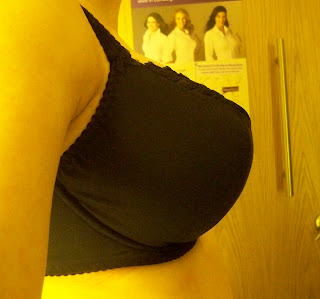 I think Alana fans might like this bra better than I did. It is also fairly low in the armpits, which I know a lot of people really need, so there’s that.
Bravissimo Boudoir Beau
This was an unpleasant surprise for me, because I had really loved the Boudoir Beau when I tried it in the red and grey color. This black one seemed like a totally different bra! It was stiffer, smaller even in the same 28J, and just MEH all over. 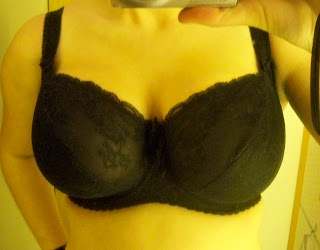 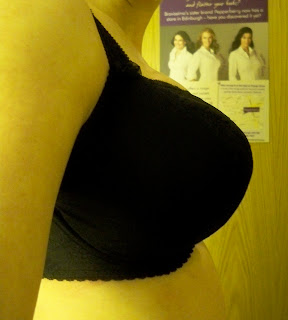 The shape from the side was pointy and low-slung, nothing like the nice rounded shape I got in the red/grey version. I’m… confused.
Bravissimo Starlet Bra 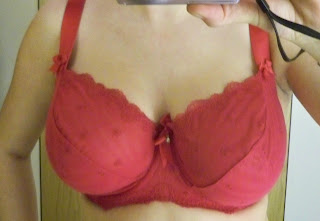 I love me a nice red bra, but this one wasn’t my favorite. It looked a bit dull from the front, and from the side you can see that I didn’t get much uplift in it. 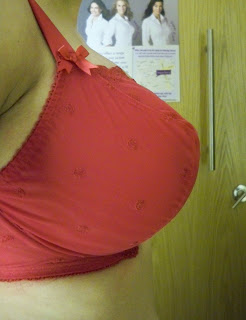 However, it is REALLY REALLY low in the armpit, so again, for people who seek that feature this bra could be a miracle. Not to be a broken record, but I also think this bra would be appreciated more by Alana fans, although the shape is a little different.
It also has very wide, shiny satin straps. I was torn; on the one hand, they are very comfortable and soft, but on the other hand, I imagine they would just slide off the shoulders over and over—the satin is on the inside of the strap as well.
Bravissimo Moulin Rose 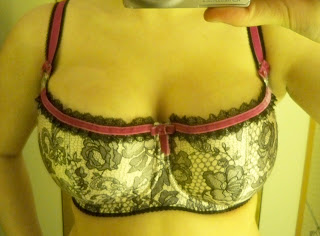 Oh man, I really wanted to like this. I think the concept is lovely, the colors are nice, and the textures are delightful (satiny cups, velvet ribbon). Sadly, this was not a bra I got along with. I had to try it in a 28HH because there is no J, but the HH usually fits me in Bravissimo’s half-cups (this one is padded, like the Parisian Plume that fit me fine in a 28HH) and this one just DIDN’T fit. 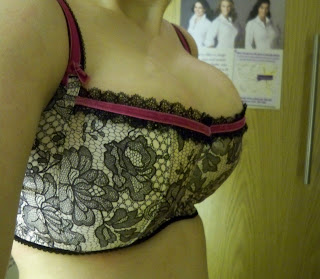 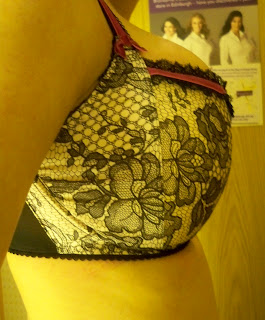 It was very small, but it was also kind of flattening—taking the minimizing effect of these half-cups to ridiculous levels.
I would recommend going up a cup size, or even two, for people trying this bra.
Bravissimo Dotty Spot 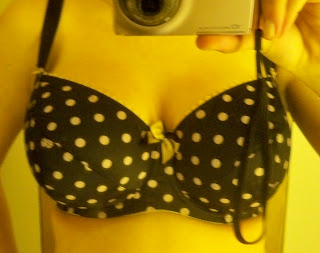 This bra is a favorite of lots of people I know for giving a super-uplifted shape—one of the best for giving the “green shape”: 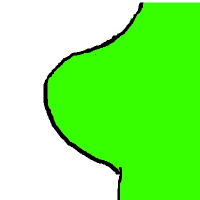 It’s not a shape that really suits my body, but I am a fan of this bra on other people’s behalf. As you can see, the 28J was a bit small on me, so I didn’t really get the full uplifted glory and projection that this bra gives others, but it’s not a bad shape. 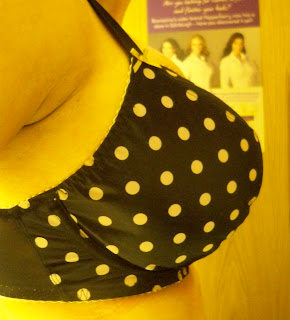 It’s also very low in the armpit, for fans of that.
Curvy Kate Thrill Me 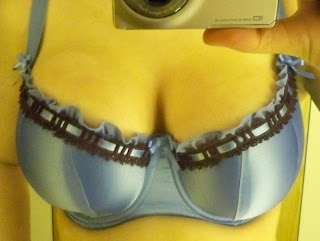 The Thrill Me is a bra that I’ve owned in various sizes and colors, but it’s not one that I’ve had an easy time with. I’d say it definitely runs about a cup size small in this color. Because it was small on me, the center gore didn’t sit on my chest, and I felt very unsupported. It would have been nice in the right size, though; overall I think the Thrill Me is a great bra, though in my opinion it doesn’t measure up to its sister the Tease Me.
Bravissimo Satine 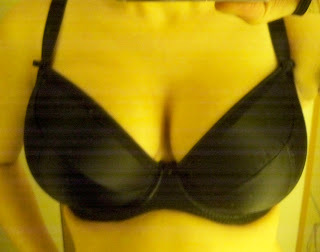 This bra is the same as last season’s Bettie Mae bra, which I’d quite liked, except this one is a million times better. It’s not orange, and it’s smooth and satiny and luxurious-feeling. I absolutely loved this bra. The center gore sat right on my chest, and it gave a delightful subtle cleavage and a nice shape. 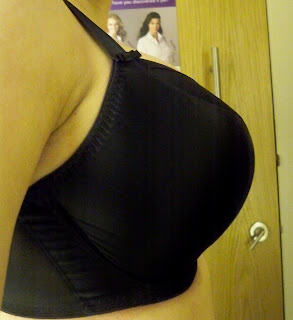 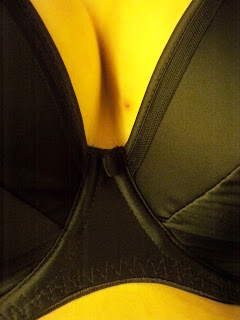 I would have definitely bought this except for the fact that they didn’t have my 28J, so I had to try it on in a “sister size” of 30HH. I may still order it online even though it’s well outside my normal budget for a bra.
Bravissimo Thea
For some mysterious reason, Bravissimo is keeping this bra a big secret. It’s not on the website, it’s not in their catalogue, you can’t order it by phone, and they didn’t bring it out to me until I asked for it by name—even though they had it in my size! The only reason I knew about it at all is from a couple of people I know who had tried it on in the shop. 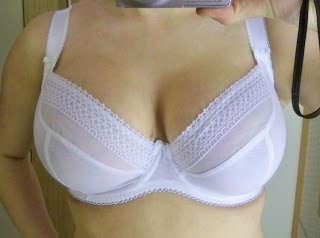 This bra is basically a plunge version of the Alana. As you may have gathered by now, I do not get on well with the Alana, but the Thea was awesome! It gave a really good shape from the side, only cut in the slightest fraction on even my full-on-top boobs, and the center gore was fairly low (low enough to show my hideous scar from the Sienna-stabbing) without making me nervous. Like with the Satine, the center gore sat right on my chest and I felt very secure and supported. 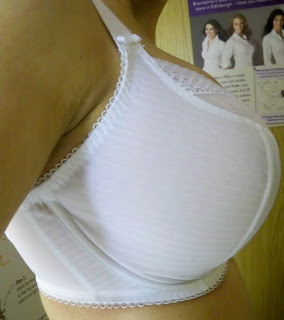 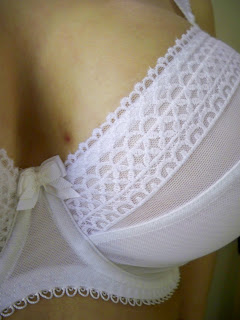 At this point, if you live near a Bravissimo you will need to go into the shop and heckle them to even get a look at this bra. But if they ever end up putting it up on the website (really, how can they NOT? Everyone will want one), I highly, highly recommend it.
Finally, I want to mention Bravissimo's Luxe Heart bra. 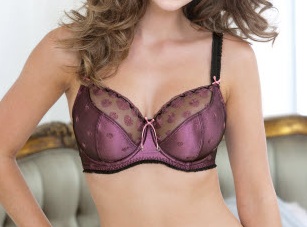 This was the one style that was actually, genuinely sold out in anything approaching my size (or so the woman working there told me). I'm going to have to say that I wasn't too depressed about this. I got a chance to look at, and feel, the bra in the few sizes they had out in the front of the shop, and I found it very stiff and scratchy. I'm also not crazy about the colors or design. I'm clearly in the minority, though, so if you like this bra you may want to be quick to order it (although it's not sold out in any sizes online yet).
Posted by Bras I Hate at 06:38