You may remember from this post that I have had my eye on the Cleo Marcie for awhile. Cleo is my favorite brand, the brand that I trust most to give a great shape, and the brand that works best for my particular boobs. So I was really excited to see that they were doing a red bra, especially one with all the cute bells and whistles and bows and buttons and polka dots. So I went ahead and ordered it, without even waiting for it to go on sale, from Figleaves. Their price was extremely reasonable, and I figured I didn't want to miss out on it.

The 28HH with the extender was a perfect fit. Although I need a 30HH in Curvy Kate and some Freya, I can just about always fit a 30H in Cleo. 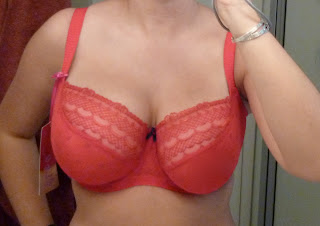 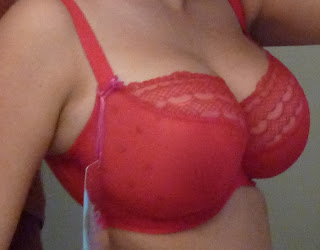 The Marcie is similar in cup shape to the Lucy (see my review here), but the structure is different. The Marcie has a full band that extends underneath the cups--this part:

The Lucy, on the other hand, doesn't have a band that continues under the cups, but rather the underwires form the bottom of the band, like so:

The purpose of the full band on the Marcie is to stop the underwires from stretching and distorting with the band. Although I personally don't really care if this full band is present or not, those people who prefer narrower underwires will appreciate it.

Because of the closer center gore and the lack of a tight lace detail on the top edge of the cup, the Marcie also runs a little bigger than the Lucy. Those with boobs that are fuller on the bottom and less full on top may want to consider sizing down in this bra to avoid gaping at the top edge. You can see here that even I had some gaping if I pushed my shoulders way forward. 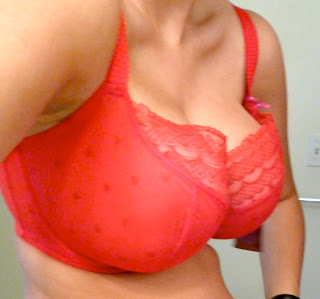 Normally, I'm fighting to avoid quadraboob, which is the opposite of gaping. So my point is that this bra is extremely open on the top, even more so than most of Cleo's bras. Although I haven't tried the floral Cleo Chloe, I  am convinced that this bra was equally open on top, which is why I heard a lot of people saying they needed to size down in it.

The straps have an interesting texture. 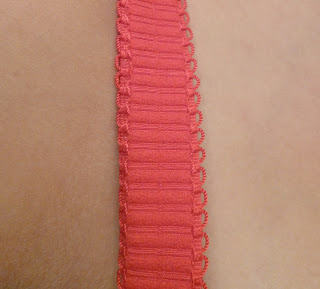 The shape from the side is very round: 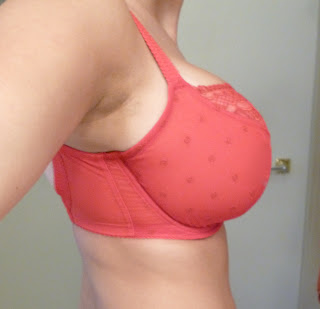 It's also a little bit strange, though. You can see that the front of my boob looks almost flattened, like it is pushed against a window. This isn't very noticeable under clothing, but was part of the reason why I was just a little bit underwhelmed by the Marcie, especially after having waited so long to buy it. Don't get me wrong, it's still a much better fit on me than the red Freya Antoinette, reviewed here, which I was replacing, and which is better suited for boobs that are fuller on the bottom than mine. Yet, I was expecting the Marcie to become my new favorite bra, one that I would continue to buy in every available color. But because of the slightly flattened shape, I have to say that I still prefer the Lucy for its perfectly round shape, even though the Marcie has a narrower center gore and the full band in front. It would be great to have some sort of hybrid of the two.

In general, though, I continue to be really impressed by Cleo's progress as a brand and I have very high hopes for what they bring out in future seasons. I'm never afraid of getting a pointy shape in Cleo bras, which is such a relief. When I was first fitted into the right size bra, Cleo didn't even exist yet. My first Cleo bra, the Frances, was a revelation, and I've loved and trusted their bras ever since. I really recommend Cleo bras, especially for those with a full-on-top shape.
Posted by Bras I Hate at 12:49