Recently, I've been on a epic journey to try to find a perfect (or at least passable) skin-toned bra. For my coloring, the best color would be a pale shade of beige-toned pink, but I was also willing to settle for the yellowish beige color that is typically marketed as "nude".

I've had quite a few failures and bras that didn't quite do, but I was pretty convinced that Bravissimo's Rococo Charm bra in Ivory/Ice Pink was going to be The One. Unfortunately, it wasn't--at all.

I ordered it in a 30H, since that was the size I had tried in the Pistachio version of the Rococo Charm. The green version had fit me well in that size, but the Ivory/Ice Pink runs smaller.

From the front, it looks pretty good: 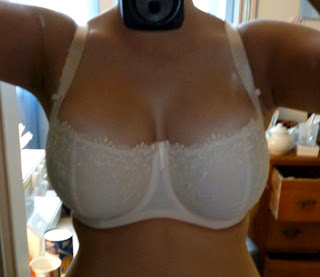 But from the side, you can see that the cup does not have enough volume. 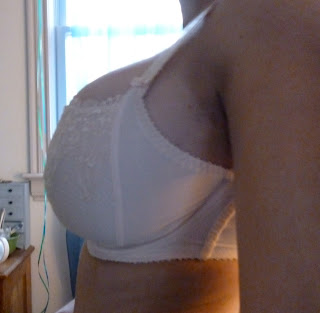 To begin with, half-cup bras like this (and especially the ones from Bravissimo) do not have much depth in the cups, but that is not usually an issue for me since I have very little volume in the bottom of my breasts. (I should have been more clear in the past that in addition to having a lot of upper fullness, I have much very little lower fullness. So I need bras that are cut open on the top, and shallow on the bottom.) So typically the shape of the Rococo Charm would work for my boobs, but this one is just a size too small. A friend who's tried a lot of Bravissimo half-cups tells me that they have been getting smaller and smaller since the Demi Diva--so the Parisian Plume was slightly smaller, the Rococo Charm slightly smaller again, and the Tanzania Stripe ran very small. I haven't tried all of them right in a row, but unfortunately I don't find this Incredible Shrinking Bra Syndrome hard to believe. It's the same thing that has happened to the Curvy Kate Showgirl Bras over the years. (I fit perfectly in a 30H in the Coral/Black Tease Me from a few years back, but would need a 30J to fit into the current colors.)

A half-cup bra (high center gore and vertical seams going up the cups) will typically give a square shape if it is too small. That's what happened with this bra. 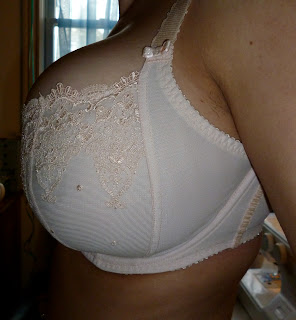 Even when I loosened the straps so much that they fell right off the shoulders, the fit was still slightly too small, and with the straps so loose, it didn't really support me at all. 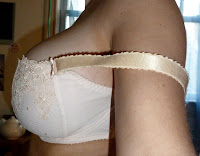 I might have returned the Rococo Charm in favor of a 30HH, but I was dissatisfied for other reasons too. The overall structure just does not seem as strong as I would expect from Bravissimo bras. In these photos you can see how much the underwire stretches: 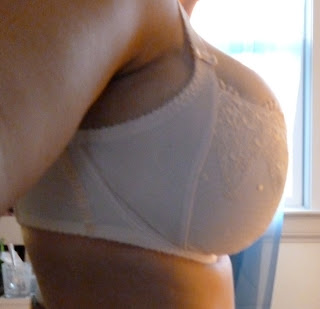 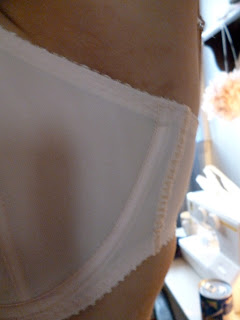 This is in spite of the fact that the band is NOT too tight on me (I wear a 30 band but measure 28'' around my underbust). What's more, the Rococo Charm has not one but TWO features that are meant to PREVENT distortion of the underwire: the full band that continues underneath the underwires in front, and the non-stretch panel in between the underwire and the stretchy part of the band. Yet these factors didn't prevent the underwire from distorting hugely. I don't mind wide underwires, but no underwire should distort this much--it changes the fit of the cups when the wire stretches.

My quest for a suitable flesh-toned bra will unfortunately need to continue because the Rococo Charm won't do it for me. I'm going to start listing the bras I want to sell on Bratabase, so when I have that set up, I'll add a link to it here.
Posted by Bras I Hate at 17:12