Freya recently made a (very quiet) decision to extend the sizes of their padded half-cup bras to H (previously they only went to G). I was thrilled to hear this, because the vertical-seam design of the padded half-cups is perfect for giving a round shape. Since Freya's balconettes tend to give a pointy shape on lots of people, I was happy to see them giving more attention to a better seam structure. Unfortunately, Miss Underpinnings recently reported that (after only about a week of these bras being available in H-cups) they're already limiting the number of bras that will have this extended size range for next season. Boo, Freya. Don't be frightened of adding a mere TWO cup sizes to a successful shape. We want these bras and we will buy them if you make them. I'm hoping my review can highlight the fact that these bras are here, they work, and they're great! If we all go and buy one, maybe Freya will see that there is indeed demand for this shape up to H cups. That's my shameless plug.

To start with, I've always loved the design of the Patsy but never bought the unpadded balconette because it's famous for giving a very pointy shape. I always lusted after the half-cup, but wasn't sure if I could take in a 34G to make it work. I love the new "Ballet Pink" color, the first to go to H, and couldn't buy it fast enough. I decided in the end to get a 32H instead of a 30H, because I was afraid these would run a little small in the cups. (The band doesn't matter much to me because I've recently gained weight and a 32 band is fine for me now, though I've preferred a 30 in the past.)

I was right that the cups run a little small, and the 32H was perfect for me in the cups. I'd recommend going up a cup size if you have a lot of upper volume or if you are usually between sizes. For those with lower fullness who are consistently the same cup size, normal cup size should be okay. 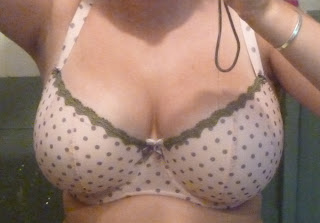 The gore on this bra does NOT lay flat on me. This is not ideal, but also not unexpected as Freya is not known to have the strongest wires. I don't mind very much because my boobs are firm enough to not slip around, and in some ways it actually makes the bra more comfortable. However, if you are a perfectionist about gores lying flat, or if you have boobs that tend to spill over into the middle, the gore in these higher cup sizes may be an issue to be aware of. 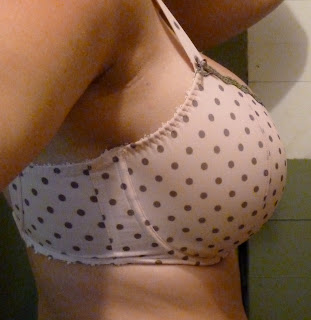 The shape from the side is stellar, exactly what I look for. The Patsy (and by extension, the Freya padded half-cup shape in general) gives a bit more lift than Cleo's Juna-based half-cups or Curvy Kate's Showgirl half-cups. It is less low-slung than those and consequently a little less minimizing, but still holds everything closer to home than most balconettes do.

As you can see, the underwires are a little less wide than many British bras in this size range. They're not as narrow as most Polish bras, though.

The padding is thin, which I'm glad about. However, when combined with the patterned mesh overlay, it's also a little 'rustle-y'.

I love how the pattern is continued on the straps and around the entire band. It's such a cute bra, just the thing I've been hoping to own for years. 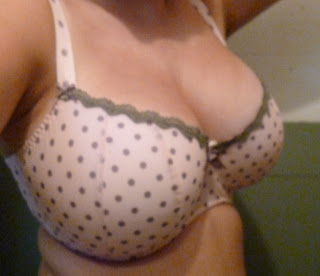 As you can see from the above photo, the apex this bra gives me is a bit low (which matches my natural apex, actually, but looks slightly different from the visual apex I get in Cleo bras). This supports my theory that the Patsy half-cup may actually work for both upper AND lower fullness. Half-cups often work only for those with upper fullness and gape on those with lower fullness, but I feel that the Patsy could work well for both. For those without upper fullness, the shape will curve back in where the bra ends, giving an uplifted round shape. For those with upper fullness, the shape ends up being a little longer and lower--actually mimicking the real shape of full-on-top boobs. I'm kind of into this.

One more note about this bra, though. It is VERY shallow. Those who have a lot of projection and need deep cups will not find this bra serves them well.

If anyone else has tried the Patsy half-cup up to H, or even in the previously existing lower sizes, let us know in the comments if it worked for your shape!
Posted by Bras I Hate at 13:20