I tried Bravissimo’s half-cup Demi Diva when it first came out in black last year, and I literally thought it was the most ridiculous looking bra I had ever seen. I mean, when they said half-cup they REALLY meant half-cup—it just went completely straight across my boobs, in comparison to how it dips down in the center on this rather inaccurate website photo.

Of course, I had always suspected that I would have liked the Demi Diva more if I'd tried it in a big enough size. Having tried on the new red Demi Diva in a larger size, I can say for sure that I just tried a size too small last time. The new red Demi Diva is also marketed a bit more accurately in their online photos:

I’m still not a fan of how high the center gore is on this bra (it would show above a lot of necklines I wear) but it seems like it needs to be that high for this particular shape and cut. And the shape is really good—very rounded, and it definitely minimizes the size of one’s boobs by keeping them so contained.

I did not, however, like the way they failed to continue the texture/pattern on the side support panel. I really don't think it would have been that hard to continue the stripes, especially as this panel took up about a third of the cup.
The Parisian Plume bra is basically the same bra as the Demi Diva, but padded. I wore the same size in both and they gave the same rounded, minimized shape, although I think the center gore was even higher on the Parisian Plume. I was happy to see that this version of the bra is marketed accurately on their website; as you can see it looks more or less the same on me as it does on the model.

My overall feelings on this bra are positive. Although the super high center gore and unpatterned side support panel sort of put me off it, the shape means it would be perfect for tight but not super-low-cut clothes. And because it does sort of put boobs more in proportion rather than emphasizing their size, it might be good for… work? I feel silly saying that since so many people would consider this a bedroom bra, but it’s definitely one of those Ninja bras that looks fancy but is also practical. And this is definitely not a bra that's going to give you extra cleavage. 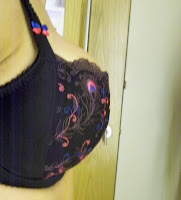 It’s awesome that Bravissimo makes one version of this half-cup padded and the other unpadded, because many people have a strong preference for one or the other and this shape and cut of bra is accessible to both. Bravissimo seems to have really put some thought and energy into designing this bra. What's more, it's actually innovative; there aren't any other bras in these sizes that are made in this style. So if you find you don't mind the look of the center gore, I'd say this is a really worthwhile bra to try out.

Edited to include: Having talked to a few other people who have tried these bras, I've learned that some people don't fit into both--seems like the Demi Diva is an easier fit while the Parisian Plume has a shape that's wrong for some and ran small on some shapes. I guess I just lucked out for once with the shapes of both working for me!
So I just want to note that although the styles are very similar in construction, the difference in padding can make a big difference in fit, so it's worth trying both of them to see if one or both will work.
Posted by Bras I Hate at 07:20