Panache's Confetti bra is discontinued and has been for a couple of years. But I decided to do a review of it for two reasons—first, it is still widely available on eBay, and second, it’s the bra against which I judge all other bras. 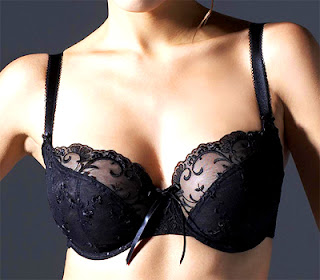 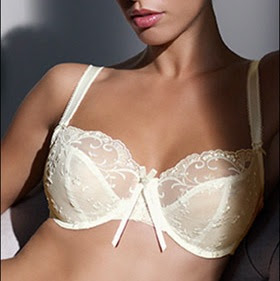 When I first ordered the Confetti, I had been wearing exclusively the Panache Harmony, which I’ll review in a later post, for about a year. Although the Harmony is a reasonably good fit on me, I was much more impressed by the fit and shape of the Confetti. Even my boyfriend declared that it suited me much better than the Harmony. You know you’re obsessed with bras when the males in your life can rattle off the specifics of a good fit! 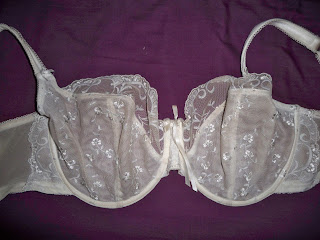 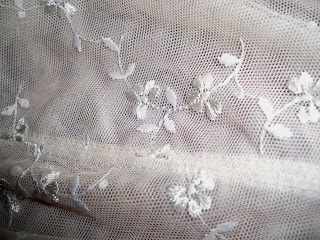 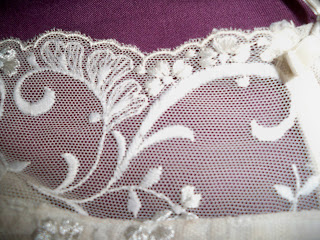 I love the rounded shape the Confetti gives me. I have found very few non-molded/non-padded bras that give a shape this good, and since I prefer non-padded bras, it immediately became a favorite. It gives me the same shape as the legendary Freya Deco, but with a better fit in my size. I also love the fact that the Confetti isn’t “a lot of bra.” It looks really good even in the highest cup sizes. The Confetti is very low cut--the center gore is an inch shorter than the one on the Curvy Kate Ella. And because there is no seam or ribbon across the top of the cup, I still fit well into a 28HH in the Confetti, despite needing a 28J in nearly all Cleo and Curvy Kate bras.
Unfortunately, there is one big problem with the Confetti which is the only reason I haven’t kept ordering more and more of them—it doesn’t have a very tight band. Part of the reason for this is that I wore it so often over the summer and wore it out, but that was only a few months. For the sake of wanting the bra to last longer, I would go down a band size if I could.
I really believe the Panache Confetti is one of the best bras for larger cup sizes that’s ever been produced. The wires aren’t quite as wide as on the Harmony or Melody, so even if you don’t normally get on well with Panache, this might be a great bra to try out, especially if you find it for a good price on eBay.
Posted by Bras I Hate at 10:45