I recently become aware that the site Large Cup Lingeriealways has free international shipping, plus they have a great outlet section. They mostly just sell Freya and Fantasie items, but I was on the lookout for another bikini, and I was thrilled to see how low their prices were for Freya’s Siren bikini. 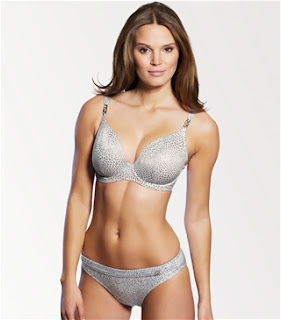 I’d had my eye on this bikini for awhile, having tried it on in a shop once and loved it. I am also pretty picky when it comes to swimwear designs, and this is one of the rare patterns that catches my eye.

The bikini top has a plunge shape and is constructed with two sections and a vertical seam—similar to Cleo’s Juna bra and several other Freya bikinis with the same plunge shape, including the Fusion, Fontana, Waves, etc.

I think vertical seams are one of the best ways to construct a bra, especially for giving a round shape. I got the bikini top in a 32GG. It only goes up to GG, but as the equivalent of a 30H (the smaller of the two cup sizes I normally wear) I hoped this size would fit fine. You might remember that I don’t worry as much about a tight band when it comes to swimwear since I usually just lie out and read a book in my bikinis.

The 32GG ended up being perfect in the cup, which means it runs a little bigger than I was expecting. If you're sized out by just a half size or a single size, you might be able to squeeze into this one. It was big for me in the band, but I guess that’s no surprise since I cheated and got a 32. This one runs true to size in the band, unlike many swimsuits which run smaller because of all the Lycra. I will need to take in the band to feel more stable in it. I think the band runs a little bigger than the band on the Fantasie Ibiza bikini I reviewed earlier, since I felt that the 32 was an okay fit in that one.

The shape from the side is really great—very round. 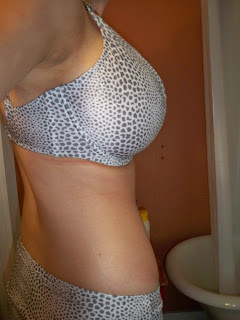 I also like the fact that it is a bit lower-cut. Since it’s a bright white shade with sassy animal print, I was always intending this to be a flirtier, sexier bikini than my Fantasie Ibiza, and the extra cleavage plays into that. The gore also sits flat, which is a pleasant surprise considering the band is too big.

The biggest annoyance I have with the Siren top is that the seams are pretty bulky. It's not padded at all, but there seems to be a lot of stuff going on in that seam. It shows under tops and I noticed the seam became very prominent when I was lying down on the beach. I wonder if the cups were even too big for me and that's why the seam was taking on a mind of its own because it wasn't being pulled against my body. However, the cups are spot on when I'm standing so I wouldn't want to try a smaller cup size--although I find myself tempted by the notion that I MIGHT fit into a 30GG in this style of Freya plunge bikini, as I do in the Deco. I think the 30GG bikini would be about a half size too small, though.

As for the bottoms, I was a little unsure what size to order. I normally need a medium for my hips, but a small for my butt. I didn’t want any cutting in on the sides, so I chose the medium. 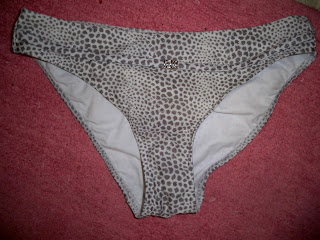 I think either size would have had some problems. If I got the small I would have had visible love handles. But with the medium, it is definitely too big on my butt. Swimwear also gets even bigger when it gets wet, so I’m going to have to work some magic to ensure I won’t find myself pantsless after a wave washes over me. The trick I usually use when I have this problem is to take in the crotch section a bit. This pulls down the back of the briefs so they sit where my diminutive butt is and won’t get baggy. Doing that also makes the briefs sit a bit lower on the hips, which I like. I think for people with a more average sized butt in relation to their hips, going with your normal bottoms size should be fine.

It’s hard to tell in photos, but the leopard print on the Siren actually has a border of silver glitter on each spot. 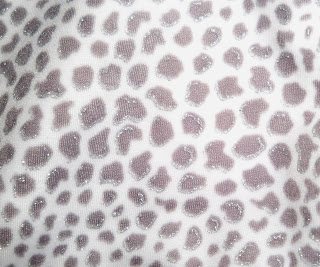 I hadn’t realized that when I ordered it, but honestly, I’m down with it. I’d recommend this bikini if you want a bit of shimmer and glitz this summer. It really makes me feel gorgeous, which is pretty important when you’re half-naked on a beach, if you ask me!
Posted by Bras I Hate at 10:01