How Many Bras Do You Need To Own, Anyway?

From time to time, I come across blog posts that list the types of bras everyone needs to own. Of course, these posts are often put together by sites that actually sell bras. That’s not necessarily a bad thing, but I’ve noticed that the lists usually focus on different bra shapes, suggesting that everyone own a balconette, a strapless bra, a moulded T-shirt bra, a convertible/halter bra, and a racerback bra.

I personally feel this is sort of excessive. In the G+ crowd (and even the D+ crowd), I doubt many people own a racerback bra or a halter bra, much less both. The fact is these bras don’t really exist for the high cup sizes and probably aren’t priorities for most of us.

I know lots of people own a strapless bra, but I’m sort of cynical about them. They never seem to be constructed well and usually don’t even go above G cups. The strapless bra I own is actually a sort of basque. It stays up, but it also makes my boobs about four sizes bigger because it is heavily padded and has a downward-pointing construction. So if I’m trying to wear it with a strapless dress, I usually can’t even zip the dress up once I have the strapless basque on. Plus, the really nice strapless dresses I’ve found all have boning and can be worn without a bra even with my H/HH/J cup boobs. So I’m going to go ahead and say that no one should feel that they ‘need’ to own a strapless bra unless they find one they actually like.

When I think about the right number of bras to own, I’ve always though in terms of color instead of shape. To start with, there are the basics: black, white, and nude everyday bras (padded, molded, or unpadded as per personal preference). 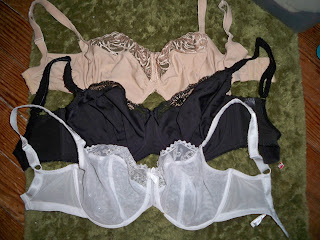 White bras certainly are not a ‘must’ for everyone because they usually show under white or sheer tops (hence the need for a nude bra) and therefore aren’t necessary unless you like them (I love them). Black bras are good to wear under black tops because lighter or nude bras can show in photos with flash, like this: 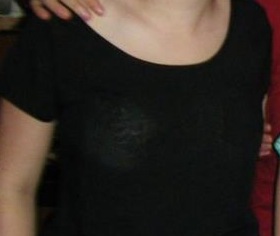 I like a little color in my life, so I’ve always liked to also own two colored everyday bras. The colors I’ve generally gravitated towards are light blue (or sometimes teal) and pink. This adds up to five bras, one for every weekday. 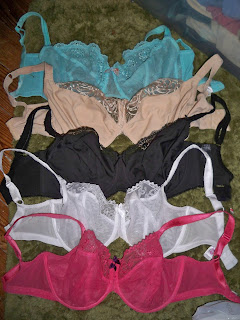 Recently, I’ve also come to feel that red is a great mental boost and a good basic, so I also consider red a bra color that I personally ‘need’ to own. 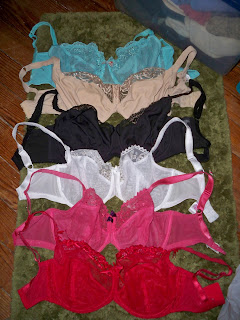 In terms of practicality, it’s also useful to own a sports bra and a plunge bra. For some people, this category of practicality might also include a strapless and/or convertible bra. 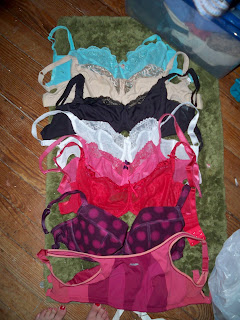 Here we have 8 bras, which I would consider the basic amount of bras I need to structure my wardrobe around. But of course, it’s also nice to own a few “fun” bras—sexy bras, patterned bras, and other colors. And it’s very easy to suddenly find yourself with multiples of the basic colors if you take advantage of good deals when you find them. I definitely bought way too many bras when I was in the UK—I couldn’t resist all the cheap eBay deals, plus I wanted to stock up before my return to the US. And suddenly I find myself with this bra-splosion: 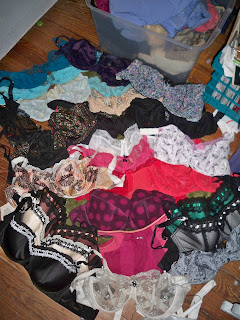 My collection at this point is massive and overwhelming. And actually, I find this kind of depressing. With so many options, most of my bras never even get worn, even if I like them. I always feel like I have no idea what to choose in the morning. And the bras pictured above are just the ones that I actually wear. I also have a sizeable stack of bras I no longer wear that don’t fit right or are getting too worn out: 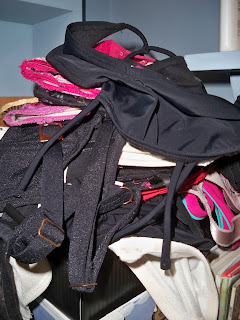 Coming home to the US and seeing my old bras—the ones I owned when I first started my collection—makes me feel nostalgic. At that point, I really did own just one black, nude, white, pink, teal, and red bra. And those bras are well-worn but still in really good shape. I loved them and took care of them. In future, if my heap of floral and fashion bras ever thins out, I’m going to try to focus on just the basics when I replenish my collection. I don’t like to have a huge excess of clothing, and bras are no exception. If you’re just starting a bra collection, it’s worth taking some time to think about what you would consider a good ‘basic’ collection before you end up with a massive overflowing drawer, like me!

I also feel like it’s important to consider what matching undies you have. Some people buy the matching panties that go with the bra, but I personally prefer to buy cheaper cotton underwear (Victoria’s Secret Pink makes my favorite styles and they last a lot longer than all the other brands I've tried). Ideally, I would own five pairs of underwear to match each bra. But in real life, that’s not the case at all. I only have five pairs of red underwear to match my three red bras, only one pair of nude underwear to go with my nude bra, and many of the floral bras I have don’t match any of my underwear at all. This is another factor to consider as you build your collection.

How many bras do you own? What bras do you think are essential to form a basic collection?
Posted by Bras I Hate at 12:00

Email ThisBlogThis!Share to TwitterShare to FacebookShare to Pinterest
Labels: Shopping