The Curvy Kate "Ella": Another Success

After my luck with the “Angel”, I decided to buy it in a second color, and since Brastop was doing free shipping, I got some other things to try as well. I noticed the “Ella” was back in stock in Ivory/Coral in a 28J and decided to try it. I needed a new Ivory colored bra because my Panache “Confetti” wasn’t too happy with me after I wore it literally every day for the whole summer. I had bought a ton of matching underwear so I wanted another bra in the same color. 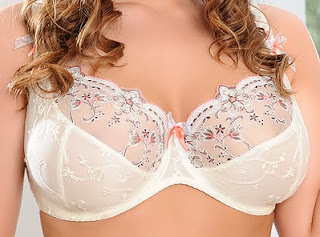 I really wasn’t wild about the floral design on the “Ella” from the online photos. I sort of thought it looked like something a kindergartener would draw. But I do crave novelty so I decided to jump on the crazy train and give it a shot.
When the “Ella” arrived, I was thrilled to see that it didn’t look at all like a child’s scribbling! I’ve included some of my own photos, but even these can’t really communicate how pretty it is, I think it’s just a bra that you have to see in person to know how attractive it is. 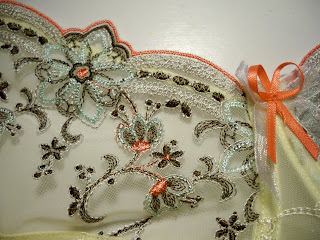 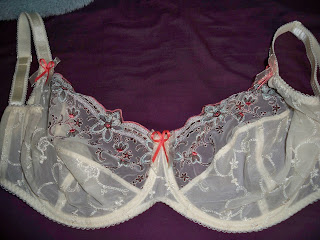 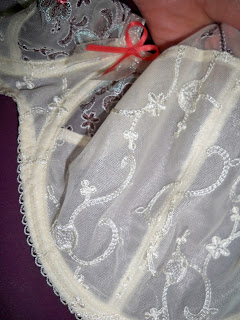 It also gave me a really good shape. In the “Angel”, the ribbon did cut into my boobs a little bit, and I really would do better in a 28JJ, but the “Ella” fit perfectly in the J-cup as there is nothing stiff going across the top of the cup at all. It also gives a nice rounded shape, more so than the “Angel” and almost as good as the Panache “Confetti” (nothing is really QUITE as good as the “Confetti” at giving a round shape). As you can see from this side view, the “Ella” is the tiniest bit pointy but it looks rounder than this under tight stretchy clothes, which is really all I wear anyway.
The “Ella” is definitely the best of the Curvy Kate bras I tried. It’s not as sexy as the “Angel” but more of a heavy lifter. The “Ella” is discontinued, so I may buy the other two colors while Brastop still has them in my size. I have to admit those colors (pictured below) look pretty crazy to me from the online photos, but my experience with the Ivory "Ella" has me convinced that maybe I just need to see them in person. 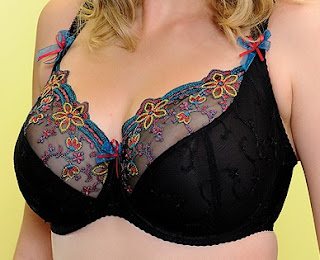 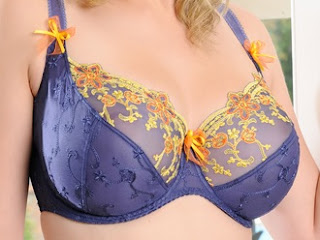 Also, I’m fairly convinced that the new Flirtelle “Dahlia”, pictured below, which comes in black, white and nude, is the same style as the “Ella” because they have exactly the same floral pattern and embroidery. So I’ll probably give the “Dahlia” a try soon too. 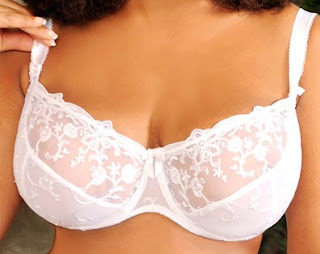