The Curvy Kate "Tease Me"

The “Tease Me” is the only Curvy Kate bra that I’ve had luck with so far (although I’m not close to giving up yet, as you’ll soon find out in a later post). The thing I like best about it is that it’s really comfortable. The straps are medium-width, the underwires are really friendly (I think they might be plastic instead of metal? If so, everyone should use plastic). The bra is padded but not molded, so it can actually fold up and fit in a drawer. It looks really nice in a lot of different sizes, it doesn’t cause me pain, it’s just… a normal bra. Its design doesn’t make a huge deal about being “plus size.” It’s a real bra for real people. 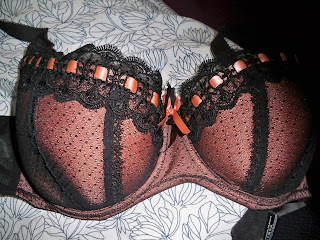 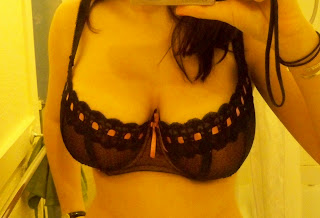 You can clearly see that it doesn't cover a lot of my chest--the opposite of "a lot of bra"--but doesn't give too much cleavage either, so I find it appropriate to wear in any situation.


It has a great back band. Most bands, I’ve found, have a much tighter bit of elastic running along the base, which makes it cut into my skin and leave an indentation that can be seen under clothes. Not too sexy. The band on the “Tease Me” is all one kind of elastic so it doesn’t show at all. Not quite as great as the laser-cut back bands on otherwise crappy Victoria’s Secret bras, but getting there. Many people find that they prefer to go down a back size in this bra, but I can't (28 is of course the smallest one they make). However, I didn't personally find that the back was too loose, and I don't get back pain from wearing it.
It also uses the vertical seam construction, shown below, which gives such a nice shape. I wish all bras were made like this. 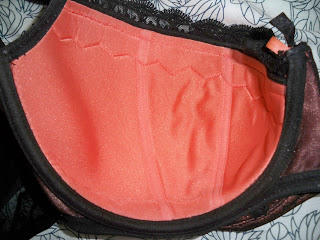 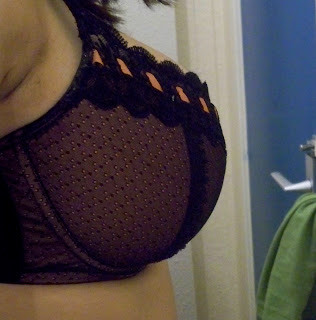 The shape is a little bit low, but very round, which I think is nice. Again, since it's not too in-your-face, it's appropriate for any occasion.


Check out this new color from their upcoming season, though. Although I myself find it pretty adorable, I have to laugh when I imagine the look of horror on my boyfriend’s face if he were to see me wearing this. It’s like the “My Little Pony” of bras!
Posted by Bras I Hate at 04:21