I’m not the world’s hugest fan of plunge bras. I don’t have extremely close-set boobs (those who do often find they need plunge bras, because a higher gore can’t sit on their chest without sitting on breast tissue) but I do tend to get a lot of cleavage even in styles that are meant to be modest. So plunge bras can leave me feeling a bit exposed—I hardly ever wear my Freya Deco.

But I do love polka dots! So I became interested in the Cleo Molly when I started wearing 30 bands and noticed that it went up to H cup. 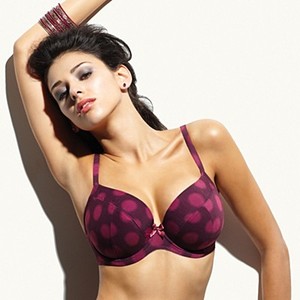 I found this bra on Figleaves in the outlet section for a good price so I decided to try it in 30H. I was taking a bit of a risk because I couldn’t find any reviews online other than one review on Bratabase where the reviewer said it was a horrible fit on her bottom-heavy boobs but would be better on top-heavy boobs. That’s me, so I went for it.

I have to say I was really pleasantly surprised by the fit of the Molly. The center gore sits against my chest and the cups are perfect for me. They are very open on top, so it did end up being good for my shape—it gave good support from the bottom and didn’t cover me where I don’t want coverage. 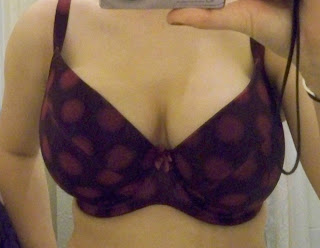 The band feels pretty average to me for a 30. (The bratabase reviewer felt that it was loose.) It is comparable to my other Panache and Cleo bras in the same size. It only has two hooks though, and has a slight angle that makes it sit as though it was riding up rather than horizontal or low, so these factors lessen the stability of the band.

As for the shape—well, from a direct side-on view the shape is quite strange. 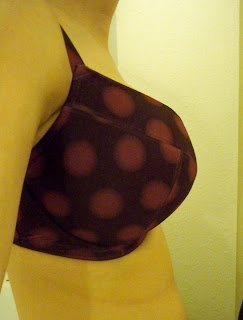 But then, from a half-profile, it looks pretty normal. 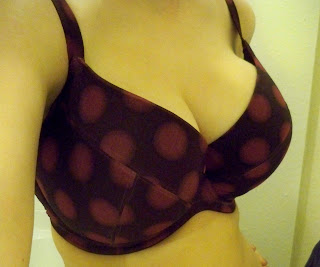 I think the odd shape in the side-on view comes from the fact that it’s a foam bra but also a seamed one made in three sections. So the foam makes a slight corner at the seams and it ends up looking very “bra-shaped” as opposed to “boob-shaped”. Fortunately, I found that this disappears under tight, stretchy clothes (especially if you wear two layers, as I always do)—the stretchy fabric sort of evens out the shape all over and it ends up being a pretty good shape.

I don’t have a huge amount of experience with plunge bras—this is my only one—so I’m not sure how much support they typically give. But I can say I definitely would not wear the Molly to go on a brisk walk. It is fine for a day of going to class, sitting at a desk, grocery shopping, going to a party, etc. It just isn’t very good at supporting the boobs from all angles because, hey, it’s really only supporting them from the bottom. So although it gives great lift, it doesn’t give perfect support and there is that weird feeling of bouncing inside your bra if you try to walk fast or climb a mountain or engage in energetic dancing (the non-fully-adjustable straps also don’t help with this). I’m guessing this is pretty normal for a plunge bra, though.

Encouraged by my success with the Molly, I decided to try another Cleo plunge bra that looked like it had similar construction, the Sally. 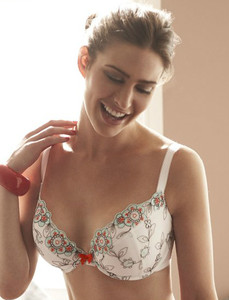 I had always found the Cleo Sally to be fascinating—I liked the colors and there are not that many plunges that go up to H cup, but the only reviews it had gotten were terrible, and there were not many reviews. I finally accepted the fact that I was going to wonder about it forever unless I tried it (sometimes you just have to accept that this is true). I found it for sale on eBay from a company that has an eBay store. It is also available on Brastop and Bravissimo at sale prices.

I got the Sally in a 30H, the same size I fit perfectly in the Molly. As you can see, it was a dismal failure: 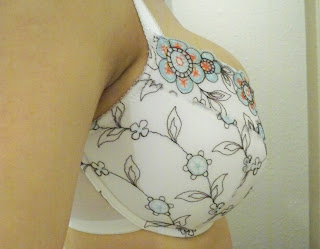 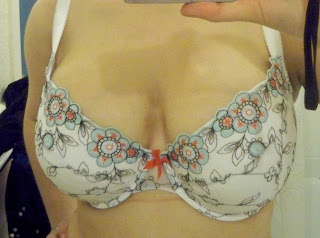 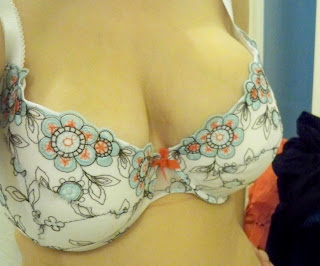 The Sally was simply smaller than the Molly, at least a cup size smaller. The center gore actually did still sit on my chest, but the cups were hardly covering my boobs and forcing them down and smashing them. I think it has more to do with size than shape, although the shape is somewhat different. The Sally has a lower center gore and lacks the extra band under the cups in front. It is also less friendly to full-on-top boobs--the upper section seemed a bit tighter than I would have wanted relative to the rest of the bra, even in a bigger size. I think this bra would be a better fit on someone with an even shape that doesn't have a big difference in fullness between the top and the bottom, or for someone with full-on-bottom boobs if they sized up. I also think it would probably work better on wider-set boobs.

I did find the bra attractive, though. Here are a few closer-up shots: 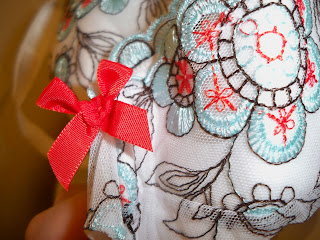 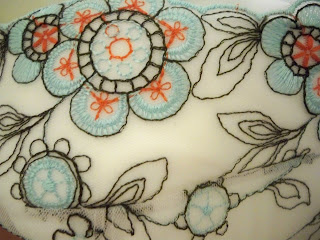 A lot of the negative reviews I had read basically just said “meh” or that people found the bra looked and felt cheap and tacky. I didn’t really find this to be true, it was comparable quality to many other bras I have tried and I think it’s quite cute. I just would have needed a 30HH or 30J in this bra, neither of which exists. I knew there wasn’t going to be any way to salvage a bra that was this small on me, so I simply returned it.
Posted by Bras I Hate at 09:08