You might remember my review of Ewa Michalak’s HM Granatowy Motyl. That was my first Ewa bra, and I was impressed with the uplift of the vertical seam structure, which suits my shape well, and the technical brilliance of the band. But the 30GG I tried was too small in the cup, not surprising considering that’s a cup size smaller than I normally wear. I also felt the band was very firm even though the bra had been heavily used by its first owner, so I figured a 32GG (70GG) would be the best fit for me in the HM style from Ewa.

I didn’t order the HM Gold directly from Poland, but rather secondhand from an acquaintance, so I can’t report on the direct ordering process. I was excited to be able to get this bra for a reduced price and, in fact, to be able to get it at all, because the HM styles are fairly few and far between. 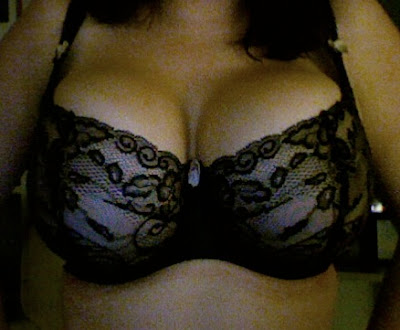 The fit of the cups is great. I also like the shape from the side. It's a classic half-cup bra shape, the same shape I get in the Cleo Juna-style bras (like the Rihanna, reviewed here and the Sadie, reviewed here) as well as the Curvy Kate Showgirl bras (reviewed here). It's very rounded, with not much forward projection. This shape tends to look like it is pointing down a bit on boobs that have a lot of upper fullness and not much lower fullness. I don't mind this very much because this mirrors the actual shape of my breasts. 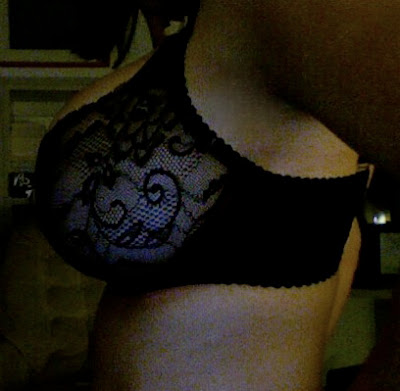 As a vertical-seamed half-cup bra, it does tend to enhance center heaviness, uplifting the boobs so dramatically that they end up pushed to the middle with a very bulky cleavage. You can see that happening in the front view, but the effect is not nearly as dramatic here as with the Curvy Kate Showgirl bras, so I feel more comfortable using this one as an everyday bra. I believe the reason for the diminished center-heaviness is the triangular panel that connects the straps to the cup. 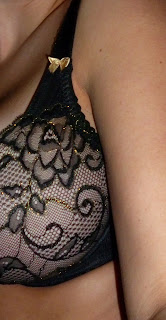 Widening the strap at the point where it connects to the cup allows the strap to provide some lift that pulls outwards, away from the center and toward the shoulders. It helps to balance the shape of the cups.

As someone who can’t stand to wear padded bras, the sheer lace cups are really nice. I imagine I would feel very overexposed if I was used to a greater level of coverage, but I really like the fact that it feels very light and insignificant in the cups, like I’m barely wearing anything. And because the fabric is very lightweight and has the slightest stretch, it forms to my shape rather than cutting in. 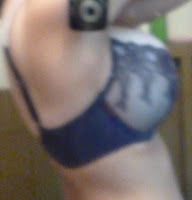 It is also thick (3 hooks) and made of a heavy, extremely stretchy material. It’s the best bra band I’ve ever experienced.

I was really disappointed that the HM Gold (a later bra) no longer features this glorious band. Instead, it has a band that’s basically the equivalent of a Cleo band—2 hooks, too thin, and sitting at too high of an angle. It’s made of a scratchy mesh instead of the wonderful soft material of the Motyl’s band. 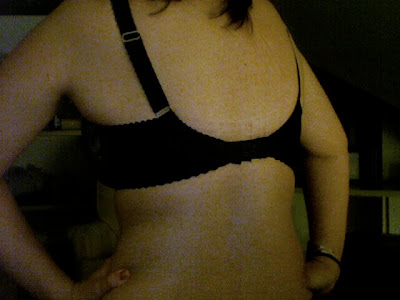 The HM Gold’s band also runs very tight. The 70 band (theoretically the equivalent of a UK 32 band) measures 25 inches unstretched, and stretches to 32.5 inches. For comparison, a Cleo Lucy with a 30 band (one size 'smaller') measures 25.5 inches unstretched and 34 inches stretched.  So the HM Gold is both tighter (even though it’s a 32) and less stretchy than my usual bras. Running small isn’t a huge issue because I could always just try a larger size, but I hate bra bands with so little stretch. Whether they are too big, too small, or just right, they never feel good, and they always cut in and cause unattractive bulging. So far, I haven’t made a final decision on whether this (and the narrowness and bad angle of the band) ruin the bra for me. I wore it a few days in a row before Christmas and ended up in such pain and frustration that I started to hate my boobs again. When I stopped wearing it, everything felt better. I am going to try it with an extender and see if that helps; otherwise it may be best to avoid wearing it two days in a row.

The HM Gold is definitely a great bra cups-wise, but the band is a serious drawback, and I’m not ultimately sure whether I feel positive or negative about it. Of course, bras tend to be a situation where a draw is the same as a loss. I personally wouldn’t buy another HM bra unless I was sure it had the nice, thick, stretchy kind of band that the HM Motyl has, and not the thin, rigid kind that the HM Gold has. If readers are looking to buy it, I would definitely recommend sizing up in the band unless you like a really tight, firm band without much stretch, in which case this bra may be your dream come true. Cups-wise, I wear the equivalent of the same cup size in the HM bras by Ewa Michalak that I wear in Cleo (32GG for Ewa, 30H for Cleo; I wear a cup size bigger than that in Curvy Kate and Bravissimo bras). The HM style is very open on top and so it's well suited to those who struggle to find bras that don't cut in on the top edge.
Posted by Bras I Hate at 00:56