I recently decided to invest in a new bikini because my old one is a bit small in the cup. The one I've had for two years is a Fantasie Seattle in 30GG.

It basically looks the same on me as it looks on the model—not extremely supportive, but essentially functional with a very casual, somewhat low shape. It’s not padded, but I think some padding might have enhanced the structure of this bra.

In case you’re considering buying the Fantasie Seattle but are terrified by the thought of sunbathing with a big metal clip sitting on your shoulder, don’t worry—the buckle detail is some kind of metal that doesn’t absorb heat. (Maybe I was naïve to worry about this, but just thought I’d mention it.)

When I started the search for a new bikini, I was looking for a few things—something that was fun and not just solid black, something where I could also get the bottoms at a pretty low price, and something with normal straps positioned where they would be on a bra. I can’t really wear halter necks because I don’t like having weight on my neck.

In my swimsuit search, I wasn’t too worried about finding something extremely supportive, because I don’t even really swim, I mostly just lie out in the sun (with sunscreen, of course!). Having a tight/firm band therefore wasn’t as important as usual to me, so I decided to look at 32 bands as well. Swimsuits have so much Lycra in them that the bands can sometimes feel tighter anyway, so I figured it would be fine, especially if I went in knowing I might need to take it in.

I ended up choosing the Fantasie Ibiza because I found it at a very low price on Leia Lingerie (you can also now buy it at Brastop).

It was also one of the very few swimsuits I found that I liked. I didn’t want anything with a small pattern or an upper section that was a different color from the bottom sections, which limited my options a lot. The only other bikini I found that I really liked was the Panache Veronica:

But that was a lot more expensive than the Ibiza, and in any case I was worried the bow in front would be annoying if I tried to throw a dress on over my bikini. (I do like the fact, though, that the Panache Veronica has a covering over the underwire so it doesn’t look “bra-like” at all.) So, I ordered the Ibiza. It wasn’t available on Brastop at the time, so I got in it the sizes Leia Lingerie had left—32H for the top (equivalent of 30HH, the larger of the two cup sizes I normally wear) and small for the tie-side briefs. 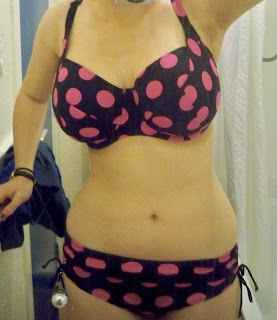 I was really pleased with how the Ibiza worked out for me. The band wasn’t as loose as I was expecting, so I may not even bother to take it in. Of course, the problem with most swimsuits is that you can’t go to the tighter hooks when it loosens up, because they have a single clasp fastening. So, when it’s stretched a bit I probably will need to take it in. I think it runs fairly true to size for a 32, maybe a bit firm.

The cup size was good too. From my two experiences, Fantasie swimsuits seem to have stretchy cups. So unlike a bra where the size needs to be really spot-on, I think most people will find they have a bit more wiggle-room in cup sizing, at least for this kind of design. That said, the stretchiness of the cups also means that the cups don’t offer quite as much lift on their own. Shortening the straps, I was able to get enough lift to satisfy me, but once again like with the Seattle, I found myself thinking that a layer of thin padding might not have gone amiss.

I also found the seams were really thick and stuck out a bit from the side, which you can sort of see here. 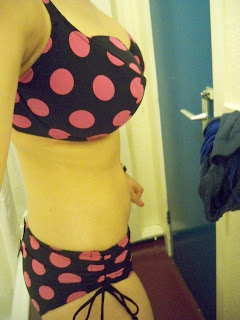 The seams are also a little itchy. I’m really, really hoping this is something that will go away with wear—I’ve never yet worn my Ibiza to the beach so I don’t know how it will perform in action, but I will update once I know.

The sizing of the bottoms was pretty good. I wasn’t sure if I should go for a small or a medium—I typically wear a medium in American underwear like Victoria’s Secret or Aerie but I’ve found that I fit into a small in some Freya thongs. The thing is though, that a lot of underwear made to come with bras sits a lot higher than the low-slung styles I’m used to wearing, which sit straight across the widest part of my hips. So even if I would prefer a medium for the fit, I often need a small in “nicer” brands (though let’s be honest here, nothing is better than Victoria’s Secret for panties) just to stop it going up much higher than I want. Obviously people have different preferences and this isn’t an issue for everyone. But I was worried the Ibiza bottoms would come up too high if I got the medium, so I went for the small. That ended up being the right choice. I have relatively wide and solid hips for my size  (and by solid, I mean that I don’t carry any fat there—it’s all bone, so it’s my frame) but I have a very small butt, so I didn’t ultimately need the medium which more closely matches my measurements.

I did find the briefs came up pretty high, but fortunately for all of us, they offer a compromise—because the ties on the sides can be ruched down tighter, you can basically push the bottoms down lower if you like, or wear them higher if that’s what you prefer. It’s a smart design and I am happy with it.

Just a note about the color: I had somehow always thought the Ibiza was navy blue with purple polka dots from online photos. Well, in real life it is actually black with pink polka dots. Still cute, I’m just not sure how I made that mistake, so I wanted to mention it.

Overall I’m very, very pleased with my new bikini. I think I will feel really cute and comfortable in it when (if??) warm weather ever arrives. I would recommend this one. If you want to see another great review of this bikini, check out the review on Fuller Figure Fuller Bust.
Posted by Bras I Hate at 03:54