I have a lot of reviews to do as I’ve had a bit of a bra shopping spree. I’ll be leaving the UK to go back to the US in three weeks, and of course it will be more difficult to access good bargains, so I’ve been taking them where I can find them over the past month. I’ll try to space out the posts a bit, but I do want to try to get them all up soon to help others who are trying to order online.

Freya’s Antoinette bra is an older style that they don’t make any more. I used to own it in these pink patterned and blue/black patterned colorways, but those are very rare and difficult to find anymore. 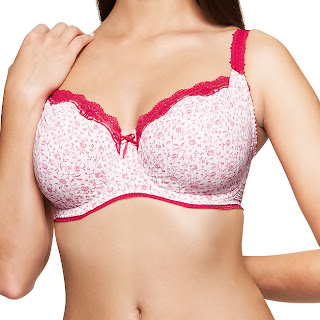 However, there is pretty good availability of the black, red, and nude Antoinettes on Brastop and eBay at really good prices. 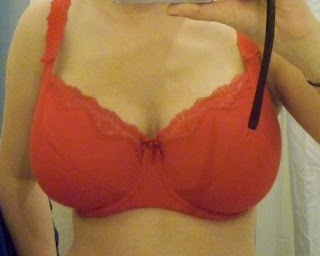 I got the red Antoinette in 30H. As you may remember, I’ve started wearing 30 bands recently because my 28s were aggravating me. The band on the Antoinette is very firm and feels a lot tighter than other 30 bands, especially compared to Freya’s more recent styles. (I’ve found it is more or less true in general that Freya’s older styles had much tighter bands than the new ones, but not across the board. For instance Freya’s older Arabella and Jolie bras always had bands that ran looser.) 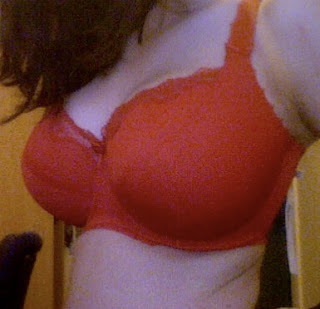 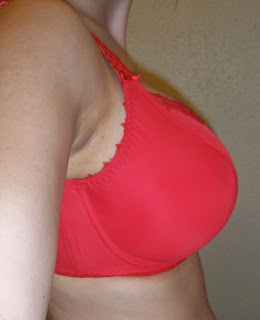 The shape I get in the Antoinette is quite good. It’s not mind-blowingly round like the shape I get from my Panache Sienna or the Masquerade Rhea I tried a few weeks ago, but it is fairly round and actually make my boobs look smaller than the Panache bras I've clung to for years. In addition, it gives more support from the top without totally squashing my full-on-top boobs so it reduces bounce a lot more than the Panache Sienna/Confetti and is therefore a better everyday bra in the long run. (Yes, I admit it.) 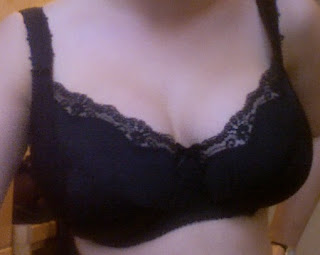 Obviously these bras are both somewhat plain, but in a pleasant minimalist way, I think. They are well-suited to being T-shirt bras due to the lack of any decorations sticking off them. The Antoinette doesn’t work very well with sleeveless or strappy tops though. I’m accustomed to wearing my bras with thin camisole tops, and I don’t mind having my straps showing, but the straps on the Antoinette are not only extremely thick, but really ugly. They have the criss-crossed rope detail I mocked in this old-school post and, although they are very comfortable on my shoulders, I do really wish they were thinner or at least prettier. 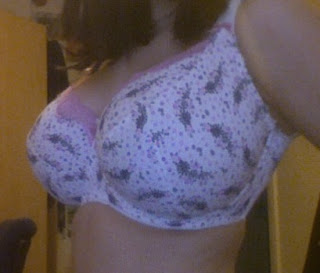 For all intents and purposes, this is the exact same bra as the Antoinette (as opposed to bras like the Clarissa, Pippa, etc that are very similar but have tiny differences). The obvious difference here is that I got it in a size up from my Antoinettes simply because that’s what was available in this long-discontinued style. I’m including it in this review mostly to show the difference between the two cup sizes, not because I expect many people will stumble upon this older style for sale. Because I’m between sizes in the Antoinette/Amy, both sizes fit. In the 30H it is just almost cutting in at the top edge, while the 30HH Amy is a better fit and gives a slightly nicer shape but covers too much skin, making it more difficult to wear under tops. If I was choosing which size to get, I’d probably go with the 30H. I’m finding that in most cases where I am between sizes, I do prefer to go with the smaller possible size because in the larger size it often seems as though the whole frame of the bra is just slightly out of scale for my body.

The pattern on the Amy is pretty ugly, let’s be honest. I always had thought from product photos that it was a feather pattern, but up close it’s a tacky, dated floral: 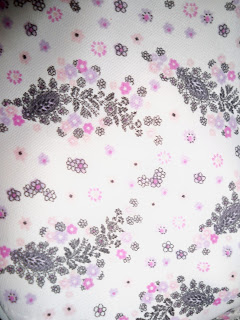 However, the shape I get in the Amy is really superb so I am willing to overlook this... 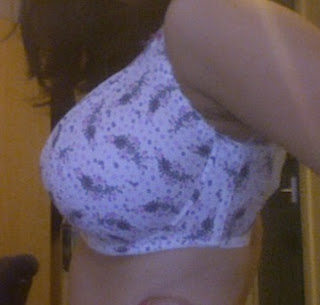 Similarly, I am willing to overlook the clunky straps on the Amy and Antoinette bras just because I find this bra a really easy fit. It’s one of the few styles of bras that I haven’t had any need to alter at all, and I’ve found myself reaching for these bras over and over in the morning. The Antoinette is a really simple choice and a great bra. It’s also versatile. My best friend has boobs with the opposite shape to mine and the Antoinette is her favorite bra. It’s one of my favorites too.
Posted by Bras I Hate at 09:52